Thomas Tuchel set up his men brilliantly to limit Pep Guardiola’s star-studded attacking line-up and the newly crowned Premier League champions managed just one shot. Chelsea had the game under control for the very first whistle and made it difficult for Manchester City to get themselves in as a goal from Kai Havertz was enough to secure the title. 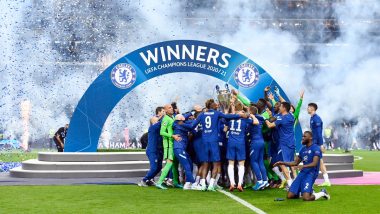 Chelsea defeated Manchester City at the Estadio do Dragao in Porto on Saturday to lift the 2020-21 UEFA Champions League trophy, Kai Havertz scored the game’s only goal as the Blues lifted the second UCL title in their history and the first since 2012. Thomas Tuchel got the better of Pep Guardiola for the third consecutive time this season, extending the Catalan manager’s decade-long wait for another European success. Kai Havertz Goal Wins Blues' First UCL Title Since 2012.

Thomas Tuchel set up his men brilliantly to limit Pep Guardiola’s star-studded attacking line-up and the newly crowned Premier League champions managed just one shot on target in the entire match. Chelsea had the game under control for the very first whistle and made it difficult for Manchester City to get themselves in and play free-flowing football as a goal from German star Kai Havertz just before halftime was enough to secure the title.

This Chelsea had very little common with the team that won the title in 2012 as for many young stars, it was the first major European final. The likes of Mason Mount, Reece James, Timo Werner, Kai Havertz and Christian Pulisic were some of the players playing their first UCL final and they delivered. Meanwhile, here is how the Chelsea players celebrated their UCL triumph.

Roll it back!!! 💙 @didierdrogba 👑 pic.twitter.com/JOR6ot8xET

Dream big. Anything Is possible. CHAMPIONS OF EUROPE !! BLUES enjoy your night, I love you all💙🏆 pic.twitter.com/0E8508ivEx

Champions of Europe. As you were. NG x pic.twitter.com/bbE3kJ1Aah

Thomas Tuchel joined some elite company as he became only the second manager after Jurgen Klopp to record three consecutive wins over Pep Guardiola and Chelsea re the first team to defeat the Catalan bosses Man City in a major cup final.

‘I'm not so sure if I feel now very confident to talk about single players because the effort was huge, We overcome some difficult and very dangerous moments, with a fantastic attitude to defending,’ said the Chelsea manager after the win.

(The above story first appeared on LatestLY on May 30, 2021 09:30 AM IST. For more news and updates on politics, world, sports, entertainment and lifestyle, log on to our website latestly.com).