Eintracht Frankfurt overpowered 10-man West Ham United 1-0 (3-1 on aggregate) and advanced into the Europa League final thanks to the sole goal from Rafael Santos Borre in the second leg of the semifinal. 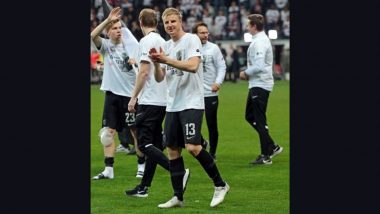 Berlin, May 6: Eintracht Frankfurt overpowered 10-man West Ham United 1-0 (3-1 on aggregate) and advanced into the Europa League final thanks to the sole goal from Rafael Santos Borre in the second leg of the semifinal. On Thursday night, both teams started with a shock into the encounter as Frankfurt lost its veteran defender Martin Hinteregger to a hamstring injury in the seventh minute before West Ham's Aaron Cresswell received his marching orders 10 minutes later following a professional foul.

Filip Kostic almost opened the scoring, but the subsequent free-kick went just wide of the right post, Xinhua reports. However, Frankfurt benefitted from its numerical advantage in the 26th minute when Ansgar Knauff had all-time on the right-wing to set up for Borre, who made no mistake and tapped home Knauff's square pass from close range. The hosts controlled the proceedings on the pitch without doing much damage, but they were lucky in the closing stages of the first half as Evan Ndicka cleared a West Ham free-kick from Jarrod Bowen off the goal line. AS Roma 1-0 Leicester City, Europa Conference League: Tammy Abraham Takes Italian Side to Final (Watch Goal Video Highlights).

After the restart, the "Eagles" started brightly into the second half as Kostic unleashed a dangerous effort from 25 metres. As the match progressed, West Ham took over but lacked in accuracy in Frankfurt's final third. West Ham kept Frankfurt's defence busy but that also opened space for Frankfurt's counterattacks as Kostic rattled the side netting with 74 minutes gone. The visitors increased the pressure in the closing stages, knowing that two goals would force Frankfurt into overtime. However, Frankfurt's defense stood firm and secured their first European final since 1980. They will face Glasgow Rangers in Sevilla on May 18. Eintracht Frankfurt 1-0 West Ham, UEFA Europa League: German Side Qualifies for First European Final in 42 Years.

"A great performance by my team. We had a difficult start, but we remained calm. I am still a bit tensed up as we saw just yesterday that you can still lose if you are leading 1-0 in the 90th minute," said Eintracht head coach Oliver Glasner. Eintracht Frankfurt president Peter Fischer added, "A dream have come true. We face Glasgow Rangers in the final. Two clubs with a long tradition will clash. It will be a tough match, but we will lift the trophy. We are going to win this."

(The above story first appeared on LatestLY on May 06, 2022 12:08 PM IST. For more news and updates on politics, world, sports, entertainment and lifestyle, log on to our website latestly.com).