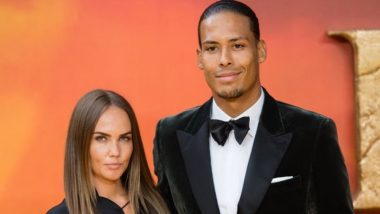 Apart from Lionel Messi winning the Ballon d’Or 2019, it was Virgil van Dijk who grabbed the headlines for his comments over Cristiano Ronaldo who was also nominated for the honour. The Liverpool star cracked a joke on Ronaldo during an interview with a Dutch TV Channel. The interviewer said, “Cristiano won’t be here, so that’s already one rival less,” said the interviewer. The Liverpool star replied with a smile, “Was he a rival then? The Liverpool star has already been at the receiving end for the comment as CR7’s older sister Katia Aveiro took to social media and slammed Virgil van Dijk. Now Piers Morgan who had interview Ronaldo not very long ago also joined the bandwagon and slammed the star. Virgil van Dijk Takes a Jibe at Cristiano Ronaldo at Ballon d’Or 2019 Awards, CR7’s Sister Katia Aveiro Reminds Liverpool Star of Champions League 2018!

Piers Morgan who obviously read the statement took to social media and reminded the Liverpool star that Ronaldo is far better than him. Virgil van Dijk who was tagged in the tweet said asked Pier Morgan to not jump the gun on social media. Dijk further clarified that the joke was made in good humour and nothing else. Check out the tweet below:

Hi Piers, If you don’t jump on the social media bandwagon and would listen to the whole interview then you would know I made a joke, and only got respect for those 2 😀

Earlier it was CR7’s elder sister who reminded the Liverpool star of the Champions League 2018 finals where Real Madrid went on to beat Liverpool by 3-1. She concluded the note by saying that CR7 is the best player for her. Talking about the awards, it was Lionel Messi who walked away with the gong for the sixth time in his career. Liverpool’s Virgil van Dijk stood second and CR7 came third in the race.

(The above story first appeared on LatestLY on Dec 03, 2019 10:04 AM IST. For more news and updates on politics, world, sports, entertainment and lifestyle, log on to our website latestly.com).