Who Is Quique Setien, Barcelona’s New Manager? Know Everything About The Spaniard Who Replaces Ernesto Valverde 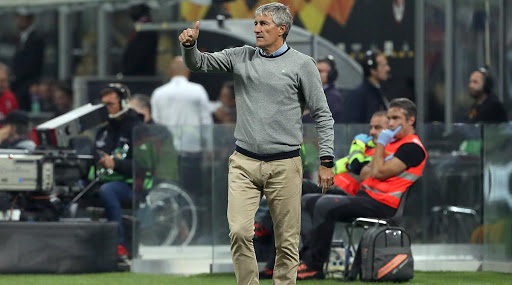 Barcelona have removed Ernesto Valverde from the position of head coach of the club after another dismal showing in a cup tournament. The Catalonian club are leading the Spanish La Liga points table at the moment but under Valverde, their ambitions of dominating Europe did not look like materialising. The man they have now put their trust in guiding Barcelona to the path of glory is Quique Setien. The former Real Betis manager will be at the helm of the club until 2022 and takes over at a very interesting time with Champions League knock out stages set to start in February. Barcelona Part Ways With Ernesto Valverde, Appoint Quique Setien as New Manager Until 2022.

There is very interesting reason Quique Setien has been chosen by the Barcelona board as he is one of the staunch believers of mixing possession-based football coupled with attacking intent. This is quite similar to way their legendry manager Pep Guardiola used to set them up for games. Under Ernesto Valverde and even Luis Enrique, the possession statistics had dropped a bit which is uncharacteristic of the club. The 61-year-old Quique Setien last managed Real Betis where he guided them to the UEFA Europa League in 2017/18 season. During his stint at Betis, he was often linked with a move to Barcelona which has finally happened. Barcelona Suffer Huge Blow, Luis Suarez Ruled Out For Four Months After Knee Surgery.

Quique Setien began his playing career with Racing Santander in 1977 as a central midfielder and went on to amass 204 caps for the club in his first spell. After representing the likes of Atletico Madrid and Logrones in the Spanish first division, Setien returned to Racing Santander in 1992 and ended his 17-year-old playing career in 1996. He was referred to as El Maestro, Quique Setien became a football manager with Racing Santander in 2000 and went on to coach several teams in Poli Ejido, Equatorial Guinea national team, Logrones, Lugo, Las Palmas and Real Betis.

Barcelona fans will need to be patient with Quique Setien as it takes time for a manager to settle at a new club. One thing is certain though, the footballing philosophy he brings with himself to the club will be admired by them.