Year Ender 2019: Lionel Messi and Cristiano Ronaldo in Twilight Years, 5 Players Who Can Replace Them As Next Football Superstars

Neymar, Raheem Sterling, Sadio Mane, Kylian Mbappe and Joao Felix are some of the players who are being hailed as the next potential greats. Nothing though is set in stone, so we take a look at the players who could be iconic figures in football in the coming years and can be considered as 'The Best'. 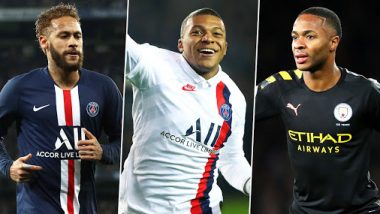 After dominating football for more than over a decade both Lionel Messi and Cristiano Ronaldo are reaching the twilight years of their careers and with each passing season the fear of retirement looms over these behemoths. So we take a look at some of the young stars who might replace these two greats at the pinnacle of world football. In any period of time, there are some players who are dubbed as the next big thing who could define their eras. In the 2000s it was Zinedine Zidane, Ronaldinho, and Fabio Cannavaro while in the recent times it was the likes of Andres Iniesta, Xavi, Luka Modric, Lionel Messi and Cristiano Ronaldo who are hailed as the world’s best. But who among the upcoming crop of talented players can take up the mantle? List of Highest-Paid Sports Teams in 2019: FC Barcelona, Real Madrid, Juventus Are The Best Paid Teams in the World.

Neymar is arguably one of the most skilful players around and was dubbed as the natural replacement for Lionel Messi at Barcelona that was until he left the Catalan club in 2017 for PSG. Young French forward Kylian Mbappe has been making the headlines in recent times as he was second behind Messi in the 2019 golden boot race and is being linked with some of the biggest clubs in world football. Eden Hazard, Raheem Sterling, Sadio Mane and Joao Felix are some of the players who are being hailed as the next potential greats. Nothing though is set in stone, so we take a look at the players who could be iconic figures in football in the coming years. Year Ender 2019 Lionel Messi Special: From Ballon d'Or to FIFA Best Player Award, A look at Top Six Moments of Barcelona Captain This Year.

The 27-year-old is still hailed by many as the third-best player in world football after Lionel Messi and Cristiano Ronaldo even though the Brazilian has been struggling with injuries in the past few seasons. Neymar is currently linked with a move back to Barcelona and could potentially become the best player in the world if he continues performing as he did in the past, more so with the Argentine reaching towards the end of his career.

Not many teenagers can keep up with Lionel Messi throughout the year but Kylian Mbappe gave the Argentine a tough run in last year’s golden boot race as the French forward finished second behind the Barcelona captain. The young forward has been linked with a move to Real Madrid and maybe this can launch the Frenchman’s bid of becoming the next big player in world football.

The England international has reinvented himself at Manchester City is probably the most important player in Pep Guardiola’s side. The 2014 ‘Golden Boy’ award winner is currently one of the most feared players in world football as he has turned himself into a goal-scoring monster. If the 25-year-old continues on the same path he could surely become of the best players in the upcoming years.

The 20-year-old burst on to the scene during the 2018-19 season as he was probably the most important figure in the Benfica side scoring 20 goals and assisting 11 times in 43 appearances for the Portuguese side. This earned him a move to Spanish giants Atletico Madrid for a reported transfer fee of 126 million Euros. The youngster has all the qualities to become a top player in the coming years if coached properly.

The young Liverpool full-back has emerged as one of the most exciting prospects in recent seasons due to his ability on the ball. The young defender has an ability to pick a defence-splitting pass at any time during the match and his playing style is very similar to Dani Alves. The youngster is clearly on the rise under the management of Jurgen Klopp and has the potential to become of the world’s best in the upcoming years.

(The above story first appeared on LatestLY on Dec 25, 2019 10:10 AM IST. For more news and updates on politics, world, sports, entertainment and lifestyle, log on to our website latestly.com).