Zinedine Zidane Resigns as Real Madrid Coach: A Tribute To Talismanic French Football Player in This Most Watched YouTube Video

As glorious as his stint at Real Madrid was, Zidane was a champion of a player during his playing days. A glimpse of his primetime in this tribute video! 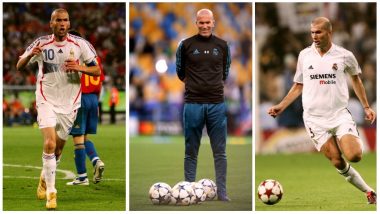 Zinedine Zidane stunned football fans across the world when he unprecedentedly announced his resignation as the manager of Real Madrid, on May 31. No one would have thought that a successful manager, who is fresh from winning the third UEFA Champions League in a row, would step down as the coach, of what is believed to be one of the best football clubs of all time, at the peak time of his career.

Zidane was a prolific playmaker and his unorthodox style of play made him one of the greatest football players of all time. His impeccable vision and firm control while dribbling the ball on the field made him a nightmare for the opposition team. The attacking midfielder was a legend in his own right.

Zidane played a little over 500 matches in his senior footballing career for different football clubs. In 506 matches that he played for them, Zidane scored a total of 95 goals. For his national side, Zidane made appearances in 108 matches; in those, he scored a total of 31 goals. The manner in which he assisted his teammates and dribbled the ball across the opposition players was a sight to savour!

Announcing his retirement at a presser sitting along with club President Florentino Pérez, Zinedine Zidane said, “I have made this decision because I love this club very much. I have taken the decision to not continue next year as Real Madrid's coach. I think that this team needs to keep on winning and it needs a change for that. After three years, it needs a different work methodology.”

Zidane had a great run at Real Madrid as the club manager, and winning three Champions League titles continuously is a perfect testimony to it. As glorious as his stint at Real Madrid was, Zidane was a champion of a player during his playing days. Zidane played for his national team – France and played for Cannes, Bordeaux, Juventus, and Real Madrid in his two-decade-long career.

(The above story first appeared on LatestLY on Jun 01, 2018 07:13 PM IST. For more news and updates on politics, world, sports, entertainment and lifestyle, log on to our website latestly.com).