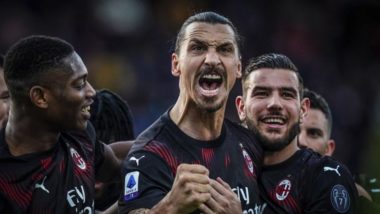 Zlatan Ibrahimovic has shared a popular old video of himself where he had a message for haters amid his transfer rumours to Leeds United from AC Milan. The video shows how he had to fight away people in order to reach the stature and encapsulates his overall journey. The video also has moments of his recent performances with AC Milan. The clip ends with Zlatan saying, “I am not like you, because I am not you, I am Zlatan Ibrahimovic and I am just warming up.” The message by Zlatan once again is loud and clear to the haters who feel that he might hang up his boots soon. Zlatan Ibrahimovic Transfer Update: AC Milan Reportedly Opens Door For Renewing Contract of Former Manchester United Striker.

Zlatan Ibrahimovic is nearing his stint with AC Milan in the next few days. However, it’s still not clear of the 38-year old will be staying back at Milan or will be heading to another club. For days now there have been reports that the former Manchester United player is about to sign the dotted line for Leeds United, Premier League which is a part of the second division of the EPL. However, there has been a glimmer of hope as AC Milan CEO Ivan Gazidis had said that the discussion is yet to happen. For now, check out the video shared by the Swede.

and i'm just warming up

However, a few sporting pundits in the fraternity are of the opinion that AC Milan might as the striker to stay back as they have been in a killer of a form after the restart of Serie A 2019-20. They have been unbeaten ever since the restart of the league.

(The above story first appeared on LatestLY on Jul 25, 2020 01:51 PM IST. For more news and updates on politics, world, sports, entertainment and lifestyle, log on to our website latestly.com).