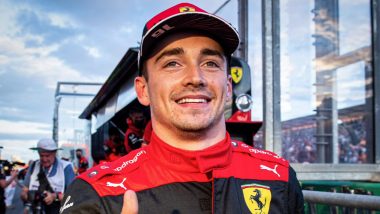 Monaco, May 27: Charles Leclerc finished fastest in the second practice session at the Monaco Grand Prix, with Ferrari teammate Carlos Sainz and Red Bull's Sergio Perez completing the top three on a hot day here on Friday. Daniel Ricciardo was garage-bound for the first 10 minutes of FP2 with McLaren working on the rear of his car. Soon after emerging, the Australian brought out a red flag having lost the rear of the car and smashed into the barriers at Swimming Pool. The session was resumed with under 40 minutes to play. Russian Grand Prix Will Not Be Replaced on 2022 Calendar, Says Formula 1.

Before Ricciardo's off, Perez went fastest with a time of 1m 14.001s, while the Ferraris were the only pair to run hards early on, the rest beginning on mediums. After the red flag, softs began to come into play and the time attack began, the digits tumbling until Leclerc set the fastest lap of 1m 12.656s, Ferrari team mate Sainz just 0.044s behind in P2. That left Red Bull's Perez third by 0.379s to Leclerc and Verstappen 0.447s behind his championship rival in P4.

Norris had a near-miss at Turn 1 after putting in a lap good for P5, 0.638s off the pace, with Mercedes' George Russell a tenth behind in P6 having brushed his wheels at Turn 5, before complaining of a loss of power late on. Pierre Gasly took seventh for AlphaTauri as the last driver within a second of P1. Fernando Alonso was over three-tenths off the AlphaTauri in eighth, his team mate Esteban Ocon only managing a lap good enough for P18 in the other Alpine. UEFA Champions League 2021-22: Real Madrid’s Belief Is Fear Factor for Liverpool in Paris.

Sebastian Vettel had an early near-miss at Swimming Pool, almost mirroring Ricciardo's accident but putting in a spectacular save to carry on and finish ninth - AlphaTauri's Yuki Tsunoda just 0.07s back to round out the top 10. Tsunoda and Kevin Magnussen, 11th, were investigated for an alleged unsafe rejoin and also an impeding incident in FP2. Lewis Hamilton finished 12th, nearly a second behind teammate George Russell, while Valtteri Bottas took P13 for Alfa Romeo. The Finnish driver had his MGU-K replaced after he missed FP1, Bottas spending much of FP2 on medium tyres - like his team mate Zhou Guanyu in P15 - with Alex Albon splitting the Haas drivers in his Williams.

(The above story first appeared on LatestLY on May 28, 2022 11:05 AM IST. For more news and updates on politics, world, sports, entertainment and lifestyle, log on to our website latestly.com).