The outrage was triggered across the USA and eventually the world, following the death of an African American man named George Floyd in Minneapolis. During these times, sports stars such as Michael Jordan, Coco Gauff, Serena Williams, Jadon Sancho, LeBron James, Chris Gayle and many others have decided take a stand to stand and join the Black Lives Matter movement. 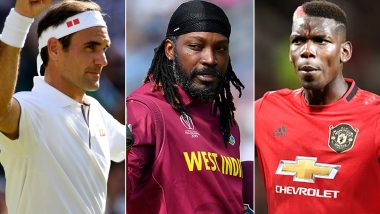 The world is outraged over the killing of George Floyd on May 25, while being under police custody. Protests have broken down all over the United States of America as people seek justice for the act of racial discrimination. During these times, sports stars such as Michael Jordan, Coco Gauff, Serena Williams, Jadon Sancho, LeBron James, Chris Gayle and many others have decided to take a stand to stand and join the Black Lives Matter movement. Coco Gauff Replies to Roger Federer's Black Lives Matter Protests, Netizens Divided Over Her Response!

The outrage was triggered across the USA and eventually the world, following the death of an African American man named George Floyd in Minneapolis. The 46-year-old lost his life after being pinned to the ground while Officer Derek Chauvin kneeled on his neck for several minutes. In the video, Floyd could be seen gasping for air and repeatedly uttering the words ‘I can’t breathe’. George Floyd Death: FIFA Urges FAs to Use ‘Common Sense’ While Sanctioning Players Over in Game Protests.

Several sports stars from various sporting fields have come together and raised their voice against racial injustice via social media.

The 16-year-old tennis sensation took a stand against racial discrimination by posting a video with her hands up in the air while asking the question 'Am I Next?'

The 22-year-old American tennis player started the 'Racquets Down, Hands Up' campaign, to take a stand against racial discrimination.

The tennis star shared a video with the caption 'Don’t pretend there’s not a problem in America.'

“Don’t pretend there’s not a problem in America.” @Nike pic.twitter.com/DYmVwjYDHY

The Swiss tennis star posted a black square to express his support for the Black Lives Matter movement.

First professional hat trick 🙏🏼. A bittersweet moment personally as there are more important things going on in the world today that we must address and help make a change. We have to come together as one & fight for justice. We are stronger together! ❤️ #JusticeForGeorgeFloyd 🙏🏼 pic.twitter.com/ntOtwOySCO

Schalke star Weston McKennie wore a white armband with the words 'Justice for George' written on it.

To be able to use my platform to bring attention to a problem that has been going on to long feels good!!! We have to stand up for what we believe in and I believe that it is time that we are heard! #justiceforgeorgefloyd #saynotoracism pic.twitter.com/TRB1AGm0Qx

The Chicah]go Bulls released a statement and said that he is deeply saddened and plain angry and stands with the people who are calling out the ingrained racism and violence towards the people of colour in the country.

LeBron James took to Twitter and just asked one simple question 'Why Doesn't America Loves US?'

Manchester Unites star Paul Pogba took to his Instagram to post an emotional message as he wrote 'This has to stop, once and for all'.

During the past few days I have thought a lot about how to express my feelings about what happened in Minneapolis. I felt anger, pity, hatred, indignation, pain, sadness. Sadness for George and for all black people who suffer from racism EVERY DAY! Whether in football, at work, at school, ANYWHERE! This has to stop, once and for all! Not tomorrow or the next day, it has to end TODAY! Violent acts of racism can no longer be tolerated. I can’t tolerate I won’t tolerate WE WON’T TOLERATE Racism is ignorance LOVE is intelligence STOP the silence STOP racism #NoToRacismWeAllOne #JusticeForFloyd #GeorgeFloyd #BlackLivesMatter

(The above story first appeared on LatestLY on Jun 04, 2020 03:09 PM IST. For more news and updates on politics, world, sports, entertainment and lifestyle, log on to our website latestly.com).