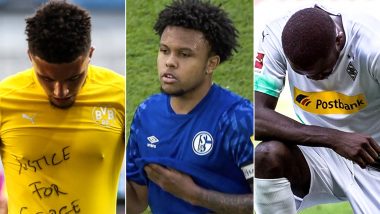 In the latest round of Bundesliga fixtures, players from several teams showed their solidarity towards George Floyd, who was killed by police in the US on May 25. Regarding these demonstrations, FIFA have urged Football Associations (FAs) to use ‘common sense’ and consider not sanctioning the players during matches. The governing body has asked competition organisers to take into consideration the context surrounding the events. 'Justice for George Floyd': England Winger Jadon Sancho Reveals T-Shirt Over African American Killing.

During the weekend, players from Bundesliga used the games as a platform to raise their voice and demand justice for George Floyd. Jadon Sancho from Borussia Dortmund after scoring a goal, removed his shirt to display a message in support of Floyd, but the English winger was shown a yellow card as per the rules of the game. Marcus Thuram Takes a Knee to Express Solidarity Towards George Floyd Amid US Protests as Borussia Monchengladbach Go Third in Bundesliga.

‘FIFA fully understands the depth of sentiment and concerns expressed by many footballers in light of the tragic circumstances of the George Floyd case’ the governing body said in a statement to Associated Press. ‘The application of the laws of the game ... is left for the competitions' organizers, which should use common sense and have in consideration the context surrounding the events.’ FIFA added.

All around the United States mass protests have taken place since Floyd’s death with people asking for justice over the killing. Post-mortem reports have shown that Floyd died of asphyxiation due to the pressure put on his neck and back.

(The above story first appeared on LatestLY on Jun 02, 2020 01:48 PM IST. For more news and updates on politics, world, sports, entertainment and lifestyle, log on to our website latestly.com).