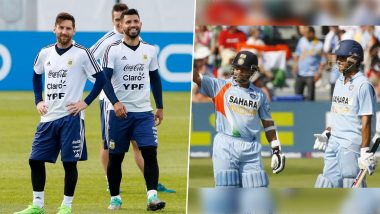 International Friendship Day is observed on July 30 every year to celebrate the importance of friendship all over the world. Two individuals can share many different relations. However, friendship is the one common factor which is required to strengthen any type of bond. Sports is also all about bringing people together as, over the years, many athletes have developed a great bond with their contemporaries on the field. Partnership is certainly an important factor in team sports and a warm relationship between two players helps them know each other well and become a formidable force on the field. On the occasion of International Friendship Day 2020, let’s look at five Best Friends Forever (BFF) of the sporting world. International Day of Friendship 2020 Virtual Celebration Ideas.

The bond between the Argentine duo goes back a long way and there are numerous tales of their close bond. Messi and Aguero met each other while playing for Argentina’s U-17 side back in 2005, and they have been very close friends ever since then. In fact, they shared rooms on national duty for nine years straight. However, on one occasion where Aguero had to stay alone as Messi missed the tour, the Barcelona star jokingly asked the former ‘not to cheat on him.’ International Day of Friendship 2020 Last-Minute Gift Ideas For Everyone.

The two legendary Indian cricketers were nothing less than a nightmare for the opposition and their records speak volumes of their capabilities. Tendulkar and Ganguly played a lot of cricket with each other and their close bond was evident with the way they played. It has been a while since they retired from the game. However, fans get to see their camaraderie with their banters on social media.

The two greats of Women’s Tennis might have locked horns on the field numerous times. However, they also share a great relationship outside the arena and one can visit their social media accounts to verify the fact. With the COVID-19 virus enforcing a lockdown, the two Tennis stars were not able to meet each other. However, when Serena came across Wozniacki’s one of Instagram pictures recently, she commented: “I miss youuuuuuu.”

Another pair of friends who join forces on the field are LeBron James and Dwyane Wade. After becoming a free agent in 2010, James joined Miami Heat and the presence of Wade is considered as one of the major factors behind his move. As expected, the duo formed a great pair and guided Miami to two successive NBA titles.

From getting ban for the infamous Koffee with Karan fiasco to winning the matches for India, Rahul and Pandya have come a long way. Along with being a vital cog of the Indian cricket team, the duo also shares a great bond and have given major friendship goals to their fans on numerous occasions. One of them is when they exchanged jerseys after the conclusion of Kings XI Punjab vs Mumbai Indians match in IPL 2020.

(The above story first appeared on LatestLY on Jul 29, 2020 05:48 PM IST. For more news and updates on politics, world, sports, entertainment and lifestyle, log on to our website latestly.com).