The 16-time world champion was last seen in action in Wrestlemania 2020, where he had lost to Bray Wyatt in a Firefly Fun House match. 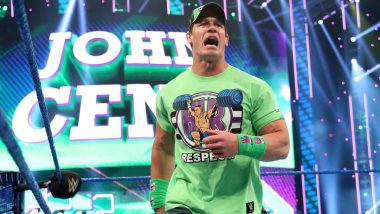 When would John Cena make his WWE return? This question has been running in the minds of wrestling fans all over and it seems that finally, the man himself has spoken up about it. Cena has been busy with his film commitments and is set to release Fast and Furious 9 this month. Rumours have been doing the rounds that WWE is eager to bring its former champion back to the show. Speaking to Jimmy Fallon on the Tonight Show show, Cena opened up about his WWE return and fans would be delighted to hear this. "Those rumors are true. I'll definitely be back to the WWE. I just don't know when," he said, when asked about his in-ring return.  Fast and Furious 9 Trailer: Physics Goes Non-Existent As Rivalry Between Vin Diesel and John Cena Takes Some Insane Turns (Watch Video)

Cena's last appearance in the WWE came back last year in Wrestlemania where he was involved in a Firefly Fun House match with Bray Wyatt. The 16-time champion has been relatively busy with his Hollywood career and he stated that the films he has committed to, have injury clauses which bars him from "facing potential injuries while being thrown around a wrestling ring"

Cena, eager to get into the WWE ring, also added, "I haven't had my last match, and I can't wait to have my next match." The former United States champion has been heavily touted to return during WWE Summerslam, which is slated to be held in August, where rumours have linked him to a match against current universal champion Roman Reigns. Should Cena be involved in that match and eventually ends up winning it, he would clinch his 17th world championship title, breaking Ric Flair's record for the most number of world titles at 16.

(The above story first appeared on LatestLY on Jun 25, 2021 12:48 PM IST. For more news and updates on politics, world, sports, entertainment and lifestyle, log on to our website latestly.com).