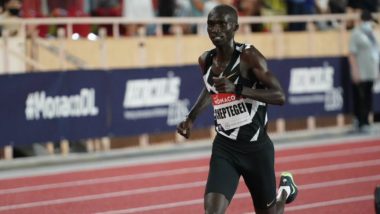 Paris, Aug 15: World 10,000m champion Joshua Cheptegei of Uganda announced the return of international athletics with a sensational world 5000m record of 12:35.36 at the Diamond League meeting held in Monaco.

Back in February before COVID-19 outbreak in Europe, the 23-year-old had set a world 5,000 record on the road also in Monaco.

"I think Monaco is a special place and it's one of these places where I could break the world record," he said after the win as per the official Diamond League website.

"It took a lot of mind setting to keep being motivated this year because so many people are staying at home but you have to stay motivated. I pushed myself, I had the right staff with me, the right coach. I'm also usually based in Europe, but being based in Uganda with my family was actually great," he added.

Kimeli was the only other man who broke 13 minutes, as he finished a distant second in a lifetime best of 12:51.78.

(The above story first appeared on LatestLY on Aug 15, 2020 10:06 AM IST. For more news and updates on politics, world, sports, entertainment and lifestyle, log on to our website latestly.com).