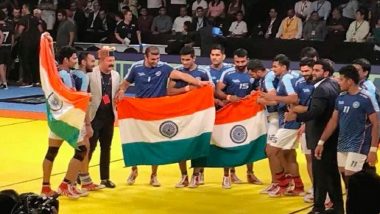 India and Sri Lanka will lock horns in the final match of the Men’s Kabaddi event in South Asian Games 2019. The match will be played on December 9 at the APF Hallchowk in Kathmandu, Nepal. India have been dominant throughout the men’s kabaddi event and are still undefeated until now. On their way to finals, they thrashed Sri Lanka, Bangladesh, Pakistan and Nepal. On the other hand, the Lankans started the event with a loss against India. However, they made a decent comeback and have reached the final. Meanwhile, you can scroll down to check out the live streaming, live telecast and other broadcast details of India vs Sri Lanka Final Men’s Kabaddi match. South Asian Games 2019 Medal Tally Updated.

The two finalists took on each other in the opening game of the tournament. India dominated the most part of the game and registered a victory by 49-16. So, the Men in Blue will certainly step into the tournament as favourites. On the other hand, Sri Lanka need to put up an extraordinary display in order to cause an upset. India are even leading the charts in the overall medal as they have aggregated 252 medals in comparison of Sri Lanka’s 197 who are placed at the third spot. Below are the live streaming and other telecast details of the match.

The final kabaddi match between India and Sri Lanka in South Asian Games 2019 will be played on December 09, 2019. The match is expected to start between 01:45 pm and 2:15 pm. (Indian Standard Time). APF Hall Halchowk in Kathmandu is the venue for the India vs Sri Lanka Kabaddi match.

Unfortunately, there are no official broadcasters of South Asian Games 2019 in India, so the India vs Sri Lanka final Kabaddi match will not be available on Television.

The 2019 edition of South Asian Games is being played at the Pokhara and Kathmandu city of Nepal and went underway on December 1. Seven Asian teams are participating across 28 sports in the showpiece tournament. India are the most successful side in the history of the event and have continued their great runs in the ongoing championship as well.

(The above story first appeared on LatestLY on Dec 09, 2019 10:34 AM IST. For more news and updates on politics, world, sports, entertainment and lifestyle, log on to our website latestly.com).