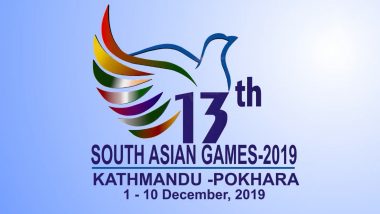 India ended its campaign at 2019 South Asian Games with its best-ever medal extending its domination in the regional multi sports-event with another top-finish at the South Asian Games. India finished SAG 2019 campaign with a record 312 medals to finish on top for the 13th consecutive time at the regional event. India's 312 medals accounted for 174 gold, 93 silver and 45 bronze medals and helped it surpass the 309 medals it had won in 2016. Hosts Nepal, over a 100 medals behind India, came second in the medal table with 206 medals, while Sri Lanka finished third in the standings with 251 medals. Sri Lanka, despite winning more total number of medals than Nepal, came third on account of winning less number of gold medals. South Asian Games 2019: India End SAG Campaign in Wrestling With 14 Gold Medals.

A total of 28 sports will be played at the 2019 South Asian Games (SAG) with cricket – one of most popular and hugely followed sport in Asia – making a return after an eight-year gap. Golf and Karate are the two new sports added into the multi-sport event. Both the games sports were added by the host Nepal as a game of their choice. Meanwhile, swimming will be the sport with the most number of events (20), while Athletics with 19 has the second most number of events. Archery, Badminton, Cricket, Football, Golf, Kabaddi, Shooting, Boxing, Tennis, Weightlifting, Volleyball, Wrestling, Judo, Handball, Basketball, Athletics, Karate, Kho-Kho, Squash, Swimming, Table Tennis, Taekwondo, Triathlon and Wushu are the games set to be played at the 2019 South Asian Games in Nepal.

Interestingly, Paragliding, which was initially included as a sport and was supposed to make its debut at the SAG, was removed after only two nations – Nepal and Pakistan – registered competitors for the event. The rule states that at least four participants should be registered for a sport to be included in the multi-event.

(The above story first appeared on LatestLY on Dec 04, 2019 10:50 AM IST. For more news and updates on politics, world, sports, entertainment and lifestyle, log on to our website latestly.com).