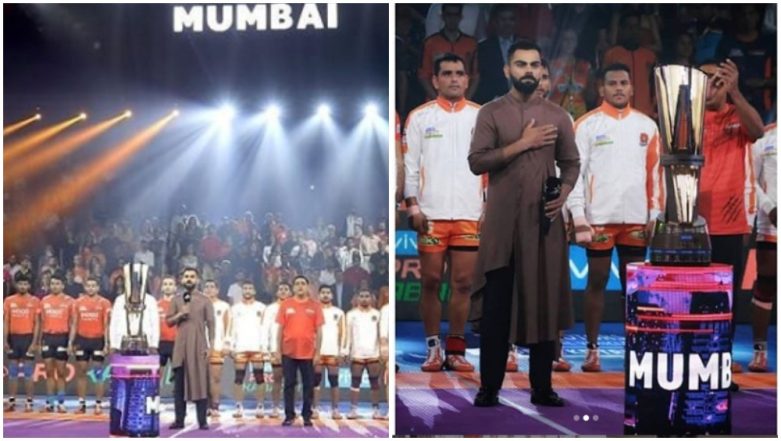 Amidst rumours of a rift between him and Rohit Sharma and reports of players divided in the Indian dressing room, Virat Kohli attended the opening day of the Mumbai leg of Pro Kabaddi League (KPL) 2019. The Indian cricket team captain was invited to sing the national anthem as the Mumbai leg of PKL season 7 kicked-off with the match between U Mumba and Puneri Paltan. The home team romped off to a victory leaving the Paltans to their second successive defeat and still without a point in season 7.  Virat Kohli-Rohit Sharma Captaincy Rift: India Player Refused to Post ‘All’s Well’ Message Reports.

"Kabaddi has taken a leap in the sports culture in our country since the inception of Pro Kabaddi League. Seeing a sport that we all have played as kids get to this stature today gives a different feeling altogether, especially when you know that the Indian kabaddi team is one of the best ones in the world," Kohli was quoted as saying by news agency PTI on the side-lines of the U Mumba-Puneri Paltan game. Virat Kohli in PKL 2019: Indian Cricket Team Captain Praises Indian Kabaddi Players, Says Kabaddi World Recognised Sport Due to Their Determination.

Kohli later uploaded pictures from the event on his social media handles in which he can be seen with a mic in his hand singing the national anthem. “Honoured to be a part of such a special evening,” the Indian skipper captioned the pictures on Instagram.

Honoured to be a part of such a special evening at @prokabaddi yesterday. Jai Hind 🇮🇳

The 30-year-old, an icon for fitness and strict training regime, also praised the players and complimented them for doing so much for the game and making Kabaddi popular worldwide.

"Then seeing how players from all over the globe come to India to be a part of the PKL shows that the level of the sport has been escalated exponentially. The reason kabaddi has become a world recognised sport is due to the fitness and determination of Indian kabaddi players," added the skipper.

Meanwhile, the Indian team is expected to leave for the United States on July 28 (Sunday) where they face the West Indies in three T20s before moving to the Caribbean for three ODIs and two Test matches. India’s World Cup disappointment opened up rumours about a possible rift between Kohli and his deputy Rohit regarding the decisions taken during the tournament.

The Indian camp is also said to be divided into two fangs – the Kohli group and those that sympathise with Rohit. While none have come out in the open and spoke about it, the growing reports and statements from anonymous BCCI officials predict reports of the rift to be true.