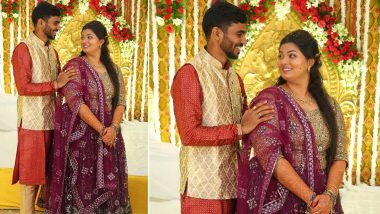 India A and Andhra wicketkeeper KS Bharat tied the knot with longtime girlfriend Anjali after 10 years of dating. The uncapped Indian cricketer made the announcement through an Instagram post a couple of days back. The 26-year-old is one the most famous cricketers in India’s domestic cricket circuit and has a great record in First-Class cricket as well. Who is KS Bharat? Few Things to Know About the Wicket-Keeper Who Replaces Injured Rishabh Pant in India vs Australia ODI Series 2020.

KS Bharat took to Instagram to share the news of his marriage with the girlfriend of 10 years, Anjali. The wicket-keeper batsman shared a cute photo of the newly married couple with the caption ‘We found love ❤️❤️ So much to look forward’.

We found love ❤️❤️ So much to look forward🤗 #myvalentine#precious#decadestrongandcounting

KS Bharat is yet to make his international debut for the national side but has been called to the first team squad twice. In November 2019, the 26-year-old was called-up as the backup for Wriddhiman Saha during the pink-ball Test match against Bangladesh after Rishabh Pant was axed from the squad by the team management.

In January 2020, Bharat was added to the Indian squad for the second ODI game against Australia as a replacement of Rishabh Pant after the 22-year-0old batsmen suffered a concussion. The 26-year-old is a well-rounded batsman in the domestic circuit and has three centuries to his name in first-class cricket.

In February 2015, KS Bharat became the first wicket-keeper batsmen to score a triple century in Ranji Trophy after he scored 308 against Goa. Later in the year he was picked up by Delhi Daredevils for 10 lakh but is yet to make his IPL debut.

(The above story first appeared on LatestLY on Aug 10, 2020 10:32 PM IST. For more news and updates on politics, world, sports, entertainment and lifestyle, log on to our website latestly.com).