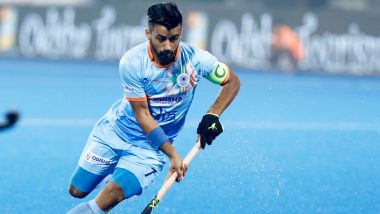 India hockey team captain Manpreet Singh and three other players have tested positive for COVID-19 ahead of a national camp in Bengaluru, the Sports Authority of India said on Friday. Defender Surender Kumar, Jaskaran Singh and drag-flicker Varun Kumar were the other three players to have been diagnosed with the virus. “I am doing fine and hope to recover very soon,” Manpreet was quoted as saying in a statement. The hockey team skipper also confirmed that he is self-quarantined at the SAI campus.

I am self quarantined on the SAI campus and I am very happy with the way SAI authorities have handled the situation. I am very happy that they made the testing of athletes mandatory. That proactive step helped in identifying the problem right in time. I am doing fine and hope to recover very soon,” Manpreet said in the statement issued by SAI.

Reportedly, all four players tested positive after returning to the national hockey camp at the SAI centre in Bengaluru after a one month break. Initially, all four had tested positive negative but post the test results, Manpreet and Surender reportedly showed symptoms. Both players later underwent tests which confirmed they had contracted the virus. (With Inputs from PTI)

(The above story first appeared on LatestLY on Aug 07, 2020 08:25 PM IST. For more news and updates on politics, world, sports, entertainment and lifestyle, log on to our website latestly.com).