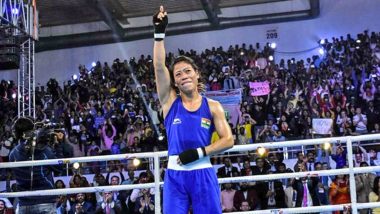 Mary Kom defeated Nikhat Zareen 9-1 in the 51 kg category finals of the women’s trails for the 2020 Olympics on Saturday. The six-time world champion will now represent India in the Olympic Qualifier tournament which will be held in China next year. The two boxers finally met each other in the ring after months of feud where the two kept discrediting each other. The 36-year-old proved too good for the youngster as the world champion came out on top in the year-ending headliner and booked her place in the Qualifiers next year. Boxer Sumit Sangwan Gets One Year Ban for Dope Test Failure.

Both the boxers were dominant in their first-round victories as the junior world champion Nikhat Zareen got the better of reigning national champion Jyoti Gulia while the multiple-time Asian champion Mary Kom defeated Ritu Grewal. Zareen had stirred quite a storm some time ago as she demanded a trial against the great Mary Kom and this started months of put-downs, complaints and tweets as both competitors kept undermining each other. The two finally met on Saturday and Mary Kom got the better of the youngster and will now represent India in the Olympic Qualifiers.

Simranjit Kaur will join Mary Kom in the Qualifiers next year as she got the better of Sarita Devi in her finals match in the 60 kg category. Few spots are still up for grabs for the next year’s tournament as matches in various categories are yet to be played.

(The above story first appeared on LatestLY on Dec 28, 2019 01:09 PM IST. For more news and updates on politics, world, sports, entertainment and lifestyle, log on to our website latestly.com).