Naomi Osaka, Glenn Maxwell And Other Sports Stars Who Took A Break In Their Career Due To Mental Health Issues

Sports stars are expected to always show grit and determination even though their career is always a roller coaster ride with tons of highs and lows amidst which many of us forget that they are human in the end and constant public exposure could have an effect on their mental health. Lately, more and more athletes are speaking about mental awareness. 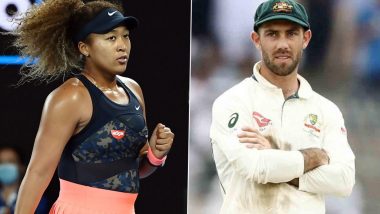 Sports stars are often associated with toughness and expected to show Fortitude but given the topsy-turvy career paths of many, the ups and downs they go through, it is natural that the athletes suffer from things we are unaware about that could have a serious effect on their mental health. However, in recent times, the sports world is going through a change as many are coming forward and being vocal about mental health. Mohammad Kaif Supports Naomi Osaka, Says ‘Let's Be Sensitive, Players in Their Weak Moments Should Be Allowed to Avoid Media’.

Sports stars are expected to always show grit and determination even though their career is always a roller coaster ride with tons of highs and lows amidst which many of us forget that they are human in the end and constant public exposure – may it be positive or negative – could have an effect on their mental health. Lately, more and more athletes are speaking about mental awareness. So in this article, we take a look at some stars, who took a short hiatus from the game to focus on their mental health.

The Japanese tennis star ahead of the French Open 2021, announced that she won’t be attending press conferences as the interviews sometimes neglect athlete’s mental health. The 23-year-old faced a lot of backlash from authorities because of her decision to boycott media and eventually ended up withdrawing from the tournament. Naomi Osaka French Open 2021 Controversy: Know Why Japanese Star Withdrew From Roland Garros.

The Australian cricketer took a hiatus in October 2019 to focus on his mental health. Maxwell missed the remaining of the Sri Lanka tour and returned to international action after a couple of months, producing some of his best displays on the field following it.

The Australia cricketer withdrew from a three-day tour game between Australia A and Pakistan in November 2019 citing mental health concerns. Cricket Australia expressed their support for Maddinson’s decision, saying the ‘wellbeing of their players' is the primary concern.

Sophie Molineux took some time away from cricket in 2019 to focus on her mental health. The Australian all-rounder was playing for Melbourne Renegades in WBBL at that time but her wish for a temporary leave was granted by the franchise.

The former England captain cut short his tour of India in 2006, citing personal reasons and later made himself unavailable for Champions Trophy that year and also leaving Ashes tour after a couple of games. Trescothick later revealed that he had been struggling with mental health issues during that time and only realised it after repeated instances.

The England wicket-keeper announced her retirement from the sport in September 2019 to focus on her mental health. ‘This has been a tough decision but I know it's the right one, for me and for my health moving forward,’ she said while hanging up her boots. She appeared in 10 Test matches, 126 ODIs and 90 T20Is.

England spinner Monty Panesar was left out of the national side after the 2013 Ashes Boxing Day Test. And that prompted him to take break from cricket. Panesar never made a return to international cricket since then but he did return to action in County Championship.

(The above story first appeared on LatestLY on Jun 01, 2021 10:10 PM IST. For more news and updates on politics, world, sports, entertainment and lifestyle, log on to our website latestly.com).