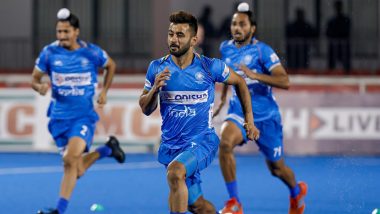 New Delhi, Nov 13: Indian players from the historic Olympic bronze medal-winning hockey squad will arrive in Bhubaneswar on Sunday (Nov 14) for the ongoing national coaching camp, which commenced on November 10 as part of their preparations for the Asian Champions Trophy in Dhaka.

The 30-member core probable group will camp in Bhubaneswar till December 9. Speaking about the coaching camp, chief coach Graham Reid said, "It will be good to have the senior men's team train in Bhubaneswar as the weather here is almost similar to that of Dhaka. It will be great for the team to train in these conditions and get acclimatised.

"We will also be playing a few internal matches between the senior and the junior core probables that will surely help in our preparations for the Junior Men's World Cup," said Reid. NZ vs AUS Preview: Likely Playing XIs, Key Battles, Head to Head and Other Things You Need To Know About T20 World Cup 2021 Final.

"The season next year will be busy for the senior squad with back-to-back major international tournaments and it will be great to kick off the year by defending the Asian Champions Trophy. We had a good camp in SAI, Bengaluru before the team went on a short break for Diwali and I believe this break would have done the players a lot of good to return to the camp feeling fresh mentally," added Reid.

Vivek Sagar Prasad, who is also in New Delhi for the Arjuna award ceremony, will join the senior camp after his campaign with the India Colt's team at the Junior World Cup, which concludes on December 5. The Asian Champions Trophy will be held from December 14-22 and will see defending champions India, Pakistan, Korea, Japan, Malaysia and hosts Bangladesh in the fray.

(The above story first appeared on LatestLY on Nov 13, 2021 01:41 PM IST. For more news and updates on politics, world, sports, entertainment and lifestyle, log on to our website latestly.com).