Roman Reigns to Feature as Contestant on Upcoming Episode of 'The R-Truth Game Show', WWE Network Reveals on Twitter 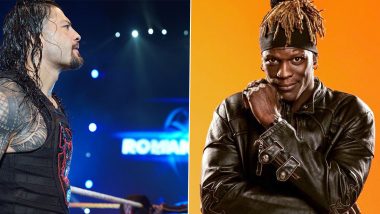 Roman Reigns hasn't been seen in WWE since a long time as he decided to stay with his family and protect them from getting infected by the coronavirus disease. Also, The Big Dog has recovered from leukaemia in 2019, which makes him immunocompromised, which puts Reigns at greater risk if he contracts COVID-19. However, good news for fans is that Roman Reigns will be seen on WWE Network very soon. The Big Dog will feature as a contestant on The R-Truth Game Show on Tuesday, August 4, 2020. This show is aired every Tuesday on WWE Network and the channel itself has revealed the news on Twitter. Roman Reigns Cried After His Match Against The Undertaker at WrestleMania 33, The Big Dog Reveals in an Interview!

Roman Reigns was initially planned to be made the Universal Champion at WrestleMania 36 by defeating Goldberg. However, The Big Dog opted to stay safe and did not turn up for the title match at 'The Show of Shows'. Braun Strowman replaced him in the match against Goldberg at WrestleMania 36 where he became the Universal Champion. Apart from Roman Reigns, Drake Maverick will also feature on the upcoming episode of The R-Truth Game Show. Maverick was released by WWE during COVID-19 budget cut plan, however, he has recently been signed again by WWE.

Speaking about R-Truth, he is mostly being used for 24/7 Championship matches and storyline. He recently lost his 24/7 belt to Shelton Benjamin on Raw. Meanwhile, fans will look forward to a jolly conversation between R-Truth and Roman Reigns this Tuesday at The R-Truth Game Show. Stay tuned with LatestLY for more updates and news from WWE.

(The above story first appeared on LatestLY on Aug 03, 2020 07:27 PM IST. For more news and updates on politics, world, sports, entertainment and lifestyle, log on to our website latestly.com).