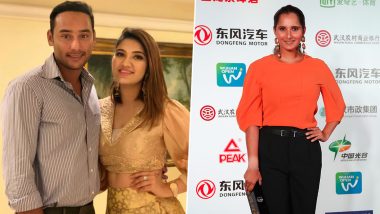 She also mentioned that she just returned from a bachelorette trip to Paris. Rumours of Anam and Asad’s relationship started doing the rounds in the news after Sania had shared a photo with Asad with caption ‘Family’. Anam’s Instagram profile also has few photos of her with Asad. Now, the couple is set to marry each other in December this year. Sania Mirza at India Economic Summit Says 'Blaming Anushka Sharma for Virat Kohli's Zero Makes No Sense'.

Sania Mirza's sister Anam is a fashion stylist and entrepreneur by profession. She is 25 years old. This is Anam's second marriage as she was earlier married to businessman Akbar Rasheed. The couple had tied the knot in 2016 but got separated in 2018. On the other hand, 28-year-old Asad is a cricketer by profession. He made his debut for Goa in Ranji Trophy 2018-19. He is a left-handed batsman. Sania Mirza’s Adorable Photo With Son Izhaan Mirza Malik Will Melt Your Heart, Check Instagram Post.

Sania recently hit the headlines after she opposed the rule of wives and girlfriends not being allowed during cricket tours. She also opposed the point that boys are distracted if their wives and girlfriends accompany them on the tour. "Many times, including our cricket team and in many teams, I have seen that wives or girlfriends are not allowed on tour because the boys will be distracted. What does that mean? What is it that the women are doing that is going to distract the men so much?" Mirza had questioned during an Economic Summit in Mumbai.

(The above story first appeared on LatestLY on Oct 07, 2019 09:07 AM IST. For more news and updates on politics, world, sports, entertainment and lifestyle, log on to our website latestly.com).