Golden State had an underwhelming start to the season with Stephen Curry coming under scrutiny for his performances, however, the 32-year-old responded in a spectacular fashion. Curry scored 62 points in the game agaubst the Portland Trail Blazers from 31 shots along with completing eight three-pointers. 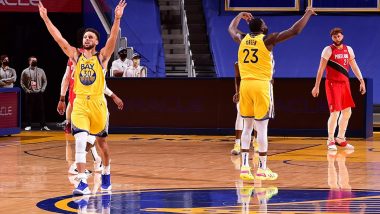 Stephen Curry might have not started the new season in the best possible way but the 32-year-old was in spectacular form in the game against Portland Trailblazers on Sunday. The Golden States Warriors’ star recorded a career-high 62 points in the game as he guided the Dubs to a 137-122 win. This is the most points by a Warriors player since Rick Barry in 1974 against the same side.

Golden State had an underwhelming start to the season with Stephen Curry coming under scrutiny for his performances, however, the 32-year-old responded in a spectacular fashion. Curry scored 62 points in the game from 31 shots along with completing eight three-pointers as the Warriors bounced back from a 25-point loss.

On his spectacular night, Curry became only the second player since the start of the 1996-97 season to score 30 points in each half, Kobe Bryant being the only other. The 32-year-old scored 21 points in the first quarter and another 17 in the fourth to secure the win.

With his first career 60-point game, Stephen Curry joins teammate Klay Thompson, Rick Barry, Joe Fulks, and Wilt Chamberlain (27 times) as the only players in Warriors history to score 60 points in a game. The 32-year-old’s previous career-high of 54 points came in 2013 against the New York Knicks at Madison Square Garden.

‘It was just a brilliant performance, We've seen Steph do so many things here over the years, so many amazing nights at Oracle and now here at Chase and it’s just a privilege to coach him, it really is.’ Said Golden States’ coach Steven Kerr.

(The above story first appeared on LatestLY on Jan 04, 2021 01:57 PM IST. For more news and updates on politics, world, sports, entertainment and lifestyle, log on to our website latestly.com).