In terms of head-to-head records, Barty and Kerber are currently level on victories after having played each other four times so far. Barty had won their last match in 2018 at the Wuhan Open. 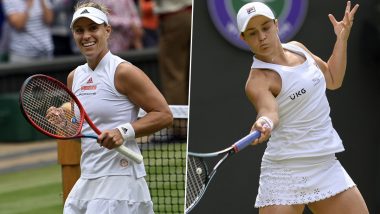 Ashleigh Barty, the world number one ranked player would take on Angelique Kerber in the semi-finals of Wimbledon 2021 on Thursday. The match would be played at the Centre Court and is slated to be played at 06:00 PM IST (Indian Standard Time). Barty defeated compatriot Ajila Tomljanovic 6-1, 6-3 in the quarter-finals and would be making her first appearance in a Wimbledon semi-final. Ever since returning after a break due to the pandemic, Barty has been in terrific form and despite injuries, she has been at her best in this Wimbledon, winning all through having just dropped one set. Kerber, who is playing her fourth semi-final after having won the title in 2018, would be a tough opponent to defeat. Who is Hubert Hurkacz? Here’s All You Need to Know About 24-Year-Old Polish Who Knocked Out Roger Federer at Wimbledon 2021

She has had a mixed run so far but with a spot in the final up for grabs, the 2016 finalist wouldn't be too easy to defeat. Kerber and Barty have faced each other four times and they share the spoils 2-2. Their latest encounter was at the 2018 Wuhan Open where the Australian secured a win by straight sets.

Ashleigh Barty v Angelique Kerber match in Wimbledon 2021 will take place on July 08, 2021 (Thursday). The match will be played on Centre Court and has a tentative start time of 06:00 pm IST (Indian Standard Time).

(The above story first appeared on LatestLY on Jul 08, 2021 03:48 PM IST. For more news and updates on politics, world, sports, entertainment and lifestyle, log on to our website latestly.com).