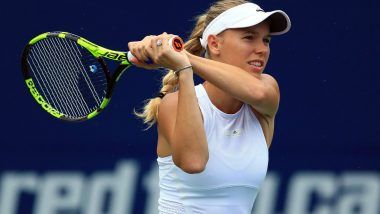 Caroline Wozniacki could not hold back her tears as the curtains came down on her glittering tennis career. The former world No 1 who announced in December that this would be her final tour lost to Tunisian player Ons Jabeur on January 24, 2020 (Friday) in the Australian Open 2020. The Danish tennis star declared her retirement last year from the game in order to spend more time with her family as she was diagnosed with rheumatoid arthritis in 2018. The former champion has played her final competitive game as she suffered a heartbreaking loss in the competition. Australian Open 2020: Melbourne Park Hit by 'Dirty Downpour' and 'Brown Rain', Twitter Shocked and Amused In Equal Measures (View Pics).

Former World No 1 Caroline Wozniacki headed into retirement after a 7-5, 3-6, 7-5 defeat on Friday in the third round of the ongoing Australian Open 2020. The Dane lost her first set of the match but rallied back to take home the second set of the game. But Tunisian Ons Janeur proved too good for the 29-year-old in the final set as she won it 7-5, thus advancing to the further stages of the tournament. Jabeur, who defeated 12th seed Johanna Konta in her first round and former world number four Caroline Garcia in the second, imposed the final defeat of Wozniacki’s career. CUTE! Rafael Nadal Kisses Ball Girl's Cheek After She Gets Hit, Wife Xisca Perelló Smiles From Spectator Seat (Watch Video).

Caroline Wozniacki couldn't hold back tears as the curtains came down on her professional tennis career. 😭

The 29-year-old called an end to a fantastic career which saw her win 30 WTA titles with her only Grand Slam win coming in 2018 at the Melbourne Park. The Danish star was emotional in her post-match interview as she said ‘It is only fitting that my last match was a three-setter, a grinder and I finished my career with a forehand error’ while holding back her tears. The tennis player said that it has been a great ride and she has some good memories and is ready for the next chapter in her life.

(The above story first appeared on LatestLY on Jan 24, 2020 10:26 AM IST. For more news and updates on politics, world, sports, entertainment and lifestyle, log on to our website latestly.com).