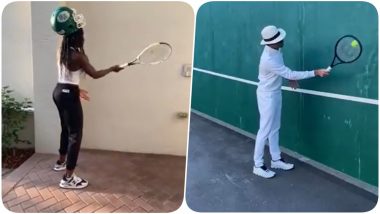 Amid the coronavirus scare when the people are forced to confine to their homes, Roger Federer posted a unique challenge where he was seen tapping the ball against the wall. He further nominated the likes of Gianluigi Buffon, Cristiano Ronaldo, Hugh Jackman, Toni Kross, Rafael Nadal and others to take up the challenge. He also asked them to choose the right hat while performing the drill. Apart from others, teenage sensation Coco Guaff was the one who responded with the video and posted a clip of herself performing the exercise. Roger Federer Shares Helpful Solo Drill, Asks Virat Kohli, Cristiano Ronaldo, Rafael Nadal and Others to Share Their Home Workout Videos.

Gauff took too many trials to get the drill right and then posted the video. But in the first video, she was seen performing the drill but had forgotten to don the right hat and thus she once again posted a video of herself wearing her brother’s helmet. We are still waiting for the reply from others but for now, you can check out the videos below:

I had to redo it because I got flamed for not wearing the hat😂 I hope my brother’s football helmet works out. @rogerfederer #tennisathome pic.twitter.com/HlC9ga7sTC

I had to redo it because I got flamed for not wearing the hat😂 I hope my brother’s football helmet works out. @rogerfederer #tennisathome pic.twitter.com/HlC9ga7sTC

Recently Roger Federer was in the news for reacting to the cancellation of Wimbledon 2020 due to the outspread of the coronavirus. This was the first time that Wimbledon was cancelled after the Second World War. The last time the Wimbledon was cancelled was in 1945. Roger Federer took to social media and said that he was devastated with the news and there was no GIF which could match his expression. Even Serena Williams had expressed her shock over the cancellation of the mega event.

(The above story first appeared on LatestLY on Apr 09, 2020 09:03 AM IST. For more news and updates on politics, world, sports, entertainment and lifestyle, log on to our website latestly.com).