International Olympic Committee (IOC) president Thomas Bach on Thursday said that he will meet Chinese tennis player Peng Shuai during the Beijing Winter Olympics, to know about her "physical integrity and her mental state". 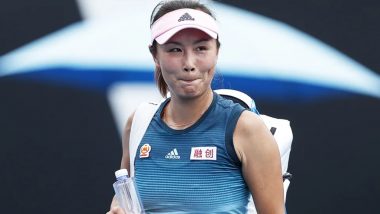 Beijing, February 3: International Olympic Committee (IOC) president Thomas Bach on Thursday said that he will meet Chinese tennis player Peng Shuai during the Beijing Winter Olympics, to know about her "physical integrity and her mental state". Peng, a former world No 1 doubles player, in November alleged on social media that former Chinese vice premier, Zhang Gaoli, had sexually assaulted her.

However, the tennis player later said that she had never accused anyone of sexually assaulting her and that the post made by her on China's Twitter-like Weibo platform was misunderstood. Peng Shuai Makes an Appearance During an Event in China, WTA Chief Says ‘Video Insufficient to Ensure Her Safety’ (Watch Video).

The IOC has held several video calls with Peng in recent months but it still remains unclear how free and safe the three-time Olympian really is. So, the IOC chief will meet Peng at the Games, held from February 4-20.

"We know from her explanations ... that she is living in Beijing, that she can move freely, spending time with family and friends," Bach told a news conference. "Now we will be able to do the next step in a personal meeting to convince us in person of her well-being and state of mind," he added. The IOC president also said that if Peng wanted her allegations to be investigated he would support her.

"If she wants to have an inquiry we would also support her in this. But it's her life, it's her allegations. We will know more about her physical integrity and mental state when we meet her in person,'' Bach said. Notably, the Women's Tennis Association (WTA) has also suspended tournaments in China due to its concerns over Peng's safety.

(The above story first appeared on LatestLY on Feb 03, 2022 08:29 PM IST. For more news and updates on politics, world, sports, entertainment and lifestyle, log on to our website latestly.com).