Italian Open 2020: Tennis Tournament to Start from September 14 in Rome 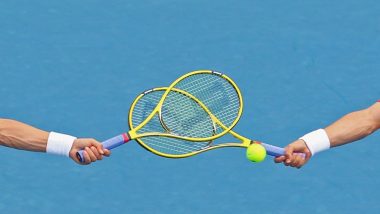 Rome, Aug 14: The main draw of the Italian Open clay-court tennis tournament will start from September 14-21, a week earlier than scheduled in Rome.

This year's edition of the tournament had been scheduled to start at the Foro Italico on May 11, but was called off because of the COVID-19 pandemic. Novak Djokovic Says He Will Play at US Open in New York Later This Month.

"The main draw will take place September 14 to 21, therefore with the last day on Monday, in the frame of the Foro Italico. The game will therefore be played one week earlier than the dates initially scheduled after the cancellation of the Madrid tournament," the Italian tennis federation said in a statement on Thursday.

The Madrid Open is now slated to be played after the US Open from August 31 to September 13, and before the French Open, which begins on September 27.

"In the next few days it will be decided whether the men's qualification draw will be expanded to 64 players and in this case the matches will start on September 11," it said.

"Otherwise it will start on Saturday 12."

The organisers further announced that the semifinalists of the US Open will have a bye at their debut and would not play before September 16 at the earliest.

(The above story first appeared on LatestLY on Aug 14, 2020 02:00 PM IST. For more news and updates on politics, world, sports, entertainment and lifestyle, log on to our website latestly.com).