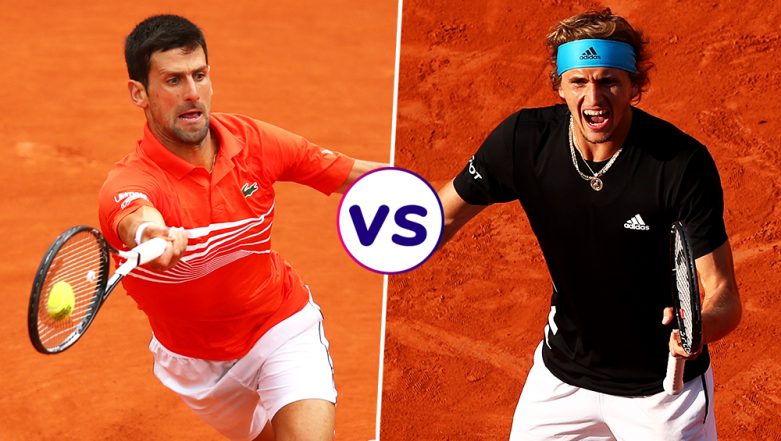 Novak Djokovic, the world no 1 tennis player, will take on Alexander Zverev of Germany in the quarter-final match of French Open 2019 on Wednesday. The Serbian, who is in search of the second calendar slam or "Novak Slam" in his career, will face the challenge posed by 22-year-old Alexander Zverev in Roland Garros 2019. Zverev, along with Dominic Thiem and Stefanos Tsitsipas, is considered the leader of "GenNext." If you are looking for live telecast and free streaming online details of Novak Djokovic vs Alexander Zverev quarter-final (QF) match in French Open 2019, you will find it all here. Also, get information on match timings in IST (Indian time) and TV channels doing the live coverage of the game.

The number one seed Djokovic has won 15 Grand Slams and is chasing his successive fourth grand slam after having won the Wimbledon trophy in 2018, US Open 2018 and Australian Open 2019. The 32-year-old Novak Djokovic is number three on the list of players with most number of Grand Slams in Men's Singles tennis. The Serbian is only behind Rafael Nadal (17) and Roger Federer (20) for most number of Grand Slams titles and experts are of the opinion that if anybody can dethrone Federer, it is Novak as he has age on his side. But for that, he will have to first ward off the challenge by world no 6 Alexander Zverev. Djokovic and Zverev have met each other four times in their career, winning two matches each.

The Novak Djokovic vs Alexander Zverev quarter-final match is scheduled to begin at 6.45 PM (Indian Standard Time). The match will be played at the Philippe-Chatrier Court.

The Novak Djokovic vs Alexander Zverev match can also be viewed online. Video streaming platform Hotstar will play the live streaming of the match. Fans can watch the full match on Hotstar.

Novak Djokovic eased into the second round of the French Open 2019 as he defeated Hubert Hurkacz 6-4, 6-2, 6-2 in the first round on Monday, May 27. In the second round, he faced Henri Laaksonen and beat the Swiss in straight sets 6-1, 6-4, 6-3 to advance to the third round of Roland Garros 2019. In the third and fourth round, the Serbian beat Italy's Salvatore Caruso and Germany's Jan-Lennard Struff in straight sets. Djokovic is yet to drop a set in the Roland Garros so far. On the other hand, his opponent from Germany, Alexander Zverev, has played two five sets matches in the first and third round against John Millman and Dusan Lajovic respectively. He beat Fabio Fognini in the fourth round to advance to the quarter-finals of French Open 2019.