The 14th French Open title and his 22nd Grand Slam crown helped Rafael Nadal move up a place from fifth to fourth in the latest ATP Rankings released on Monday while the vanquished finalists Casper Ruud too moved up in the rankings. 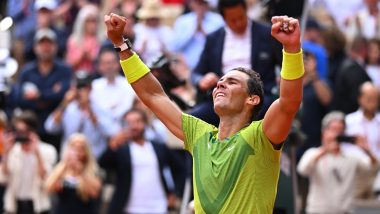 Paris, June 6: The 14th French Open title and his 22nd Grand Slam crown helped Rafael Nadal move up a place from fifth to fourth in the latest ATP Rankings released on Monday while the vanquished finalists Casper Ruud too moved up in the rankings. The 36-year-old Nadal is the oldest men's champion in the history of the clay-court event and has now moved level with countryman Carlos Alcaraz on a Tour-leading four titles in 2022. It is also the first time Nadal has won the Australian Open and Roland Garros titles in the same season. Rafael Nadal Injury Update: Foot Injury Casts Doubt on Spaniard’s Wimbledon Participation.

Novak Djokovic remained at the top of the rankings chart with 8770 for one more week before his imminent drop from the chart as he loses points from last year's French Open and the upcoming Wimbledon Championship. Daniil Medvedev remained in second place with 8160 while Alexander Zverev, with 7795 points stayed in the third place while Nadal moved up one place and is fourth with 7535. Stefanos Tsitsipas, who dropped to a place to fifth position. Ruud, the 23-year-old, jumped to a career-high No. 6 after he became the first Norwegian man to reach the final at a Grand Slam following his run at Roland Garros. The eight-time tour-level champion, who had never been beyond the fourth round at a major before, defeated seeds Lorenzo Sonego, Hubert Hurkacz, and Marin Cilic before he lost to Nadal in the final in their first meeting. Rafael Nadal Clinches 14th French Open Title and Record-Extending 22nd Grand Slam.

Carlos Alcaraz dropped one place to seventh as did Andrey Rublev at eighth with Felix Auger-Aliassime and Matteo Berrettini retaining their ninth and tenth position in the top 10. Marin Cilic moved up six places to No 17. The Croatian has jumped back inside the Top 20 following his standout run in Paris. The 33-year-old shocked World No. 2 Medvedev en route to the semifinals. By advancing to the last four in the French capital for the first time, Cilic became just the fifth active player to reach the semi-finals at all four Grand Slams, joining Novak Djokovic, Roger Federer, Rafael Nadal, and Andy Murray. Holger Rune moved up 12 places to No 28 as he continued to make waves at Roland Garros, becoming the first Danish man to advance to the quarter-finals at a Grand Slam in the Open Era. The 19-year-old, who captured his maiden tour-level trophy in Munich in April, earned the second Top 10 win of his career when he downed World No. 5 Stefanos Tsitsipas in the fourth round.

(The above story first appeared on LatestLY on Jun 07, 2022 10:15 AM IST. For more news and updates on politics, world, sports, entertainment and lifestyle, log on to our website latestly.com).