Rafael Nadal's Coach, Francisco Roig Says 'When He Arrived at Wimbledon He Was Unsure; Now He’s Among the Favourites

Rafael Nadal's coach Francisco Roig has said that when the Spanish stalwart had arrived at Wimbledon, unsure about his foot condition, he was only thinking about one match at a time, but with the 36-year-old now having secured a quarterfinal berth, he's among the favourites, which is a good sign. 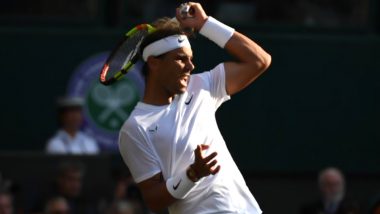 London, July 6 : Rafael Nadal's coach Francisco Roig has said that when the Spanish stalwart had arrived at Wimbledon, unsure about his foot condition, he was only thinking about one match at a time, but with the 36-year-old now having secured a quarterfinal berth, he's among the favourites, which is a good sign. Nadal has been dogged by a foot injury and doubts were cast after he won his 14th title at Roland Garros that he might not be fit enough to play at Wimbledon. But with the winner of 22 Grand Slams now all set to take on Taylor Fritz of the US in the quarterfinals, things look to be falling in place for the Spaniard, who began as an underdog at SW19. Nick Kyrgios, Wimbledon 2022 Quarterfinalist, To Appear in Court Over Common Assault Allegation.

"It's (progress) good," Roig told atptour.com after the training session. "We managed to train a lot; there were a couple of days when we almost played for four hours. When we got here, the first thing was to be able to compete. He arrived here unsure about his foot treatment in Mallorca, even though it went well for him," added Roig, who is one of Nadal's two coaches -- the other being Marc Lopez. Roig said the Spaniard had been working hard to keep alive his chances of reclaiming the title he won in 2008 and 2010.

"The goal was to keep playing better every day. Now we're in that situation. Given how last-minute it was, we can be happy after three years without playing on grass. So far, we're doing well. When we arrived, we weren't thinking about winning, but now he is among the favourites," added Roig. To be on track for a third Wimbledon title, Nadal must get past Fritz, with whom he has a 1-1 head-to-head record. In March, the American defeated Nadal in the final of the BNP Paribas Open in Indian Wells, a match in which Nadal played with a rib fracture that subsequently kept him out of action until the Madrid Open in early May. Wimbledon 2022 Day 9 Highlights: Top Results, Major Action From Tennis Tournament.

"Taylor is a player that was very promising," said Roig. "Today, his game has progressed a lot; he's had his best results quite recently. Now he hits the ball quite well; and maybe before he struggled with mobility. Today he moves much better and that's why his ranking has gone up. He's very dangerous on grass, he hits the ball hard. We'll have to have a great day," opined Roig. Roig, though, is satisfied with the progress Nadal has made in his last two matches, straight-sets win against Lorenzo Sonego and the dangerous Dutchman Botic van de Zandschulp.

"I think he's looked really good in the last two matches, although he struggled to close them out," Roig said. "There was a big difference in the level of ball striking, in dominating, going forward. The more he goes to the net, the better he'll hit the ball. "Everything you do can always be done better, especially on grass. We're working on things every day, facets that will increase his chances on court. You do things to improve. That is what we're trying on our day off. We're on grass and we need to improve things. We're working on specific things that he may see in the match so that when he has to execute them, he is confident because he's practiced them."

(The above story first appeared on LatestLY on Jul 06, 2022 12:15 PM IST. For more news and updates on politics, world, sports, entertainment and lifestyle, log on to our website latestly.com).