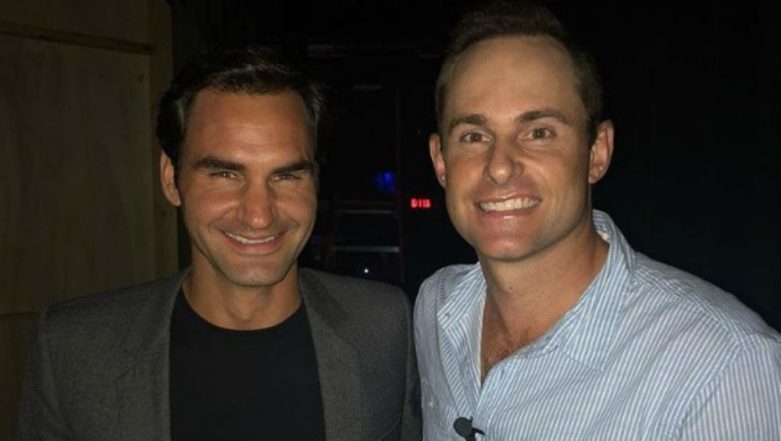 Roger Federer and Andy Roddick, one time rivals on the tennis court, united for a memorable picture which is sure to evoke memories in the minds of fans. The picture was shared by the Swiss tennis ace with a short but beautiful caption. And if the comments on the pictures are anything to go by, the fans have loved it for its nostalgic value.

"I got a lot of time for this guy!" wrote Federer and added the hashtag #TennisCreatesFriendships. The picture seems to be in connection to the Andy Roddick Foundation as Federer has used the tag #thearfoundation as one of the tags. Latest ATP World Rankings: Spain’s Rafael Nadal Remains at the Top Spot, Roger Federer Stays Second.

Check the adorable picture featuring Roger Federer and Andy Roddick in the insta post below:

I got a lot of time for this guy! #TennisCreatesFriendships @thearfoundation #andyroddick

Though the head-to-head record between Roger Federer and Andy Roddick is pretty much one sided, both have given fans memorable moments on the tennis court. Federer and Roddick have faced each other 24 times, out of which Roddick has won only three against Federer's 21 victories. Roger Federer Eats Fish Eyeballs on Running Wild With Bear Grylls on Snowy Swiss Mountains, Watch Video!

The most memorable match played between the two was at Wimbledon 2009, where the five set thriller resulted in an heart-breaking defeat for the big serving American, Roddick. Federer won the match 5–7, 7–6, 7–6, 3–6, 16–14. The match lasted for 4 hours and 17 minutes, and gave Federer his 6th Wimbledon title. This was Roddick's fourth defeat in Wimbledon at the hands of Federer but Roddick's effort was lauded by one and all in the 2009 final.