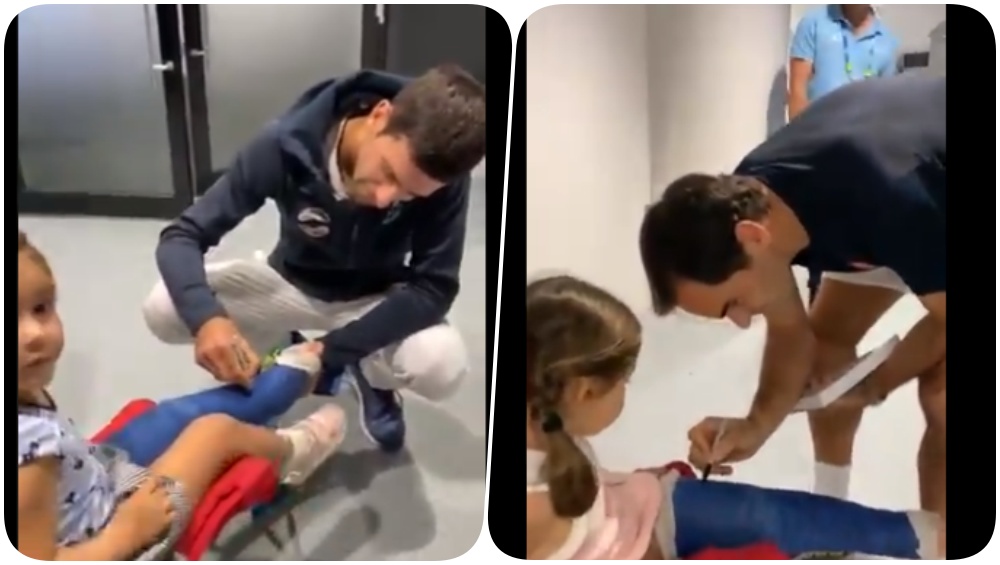 Roger Federer and Novak Djokovic are blazing guns at the Australian Open 2020. While they the duo is winning hearts with their performance on the field, their gestures with little fans. The two tennis stalwarts met a little girl who had injured her left leg and was on the wheelchair. Roger Federer and Novak Djokovic signed her plastered leg and gave the little girl the moment that she will cherish for her life. The videos of the incident were shared on the official account of the ATP Tour. Novak Djokovic Pays Emotional Tribute to Late Kobe Bryant, Defending Australian Open Champion Dons Jacket With NBA Legend’s Initials on It.

While signing her plastered leg, Federer was heard saying, “I will sign next to Rafa.” Whereas the Serbian drew a duck. Roger earlier today defeated USA’s Tennys Sandgren 3-6, 6-2, 6-2, 6 (8)-7(10), 3-6 and advance into the semi-final of the event. Whereas Novak Djokovic is currently battling it out against Milos Raonic in the quarter-finals. Now, let’s have a look at a couple of videos. Rafael Nadal, Coco Gauff and Nick Kyrgios Pay Emotional Tributes to LA Lakers Legend Kobe Bryant (Watch Video).

Special cast this one 🙌@DjokerNole | #AusOpenpic.twitter.com/DxqiRLFMJe

If Novak goes on to beat Milos in the quarterfinals of the event, we shall once again have a mouth-watering clash between Federer and the Serbian. Federer just managed to get past John Milman and Marton Fucsovics in the third and the fourth round battles respectively but Novak has been quite convincing in the tournament so far.