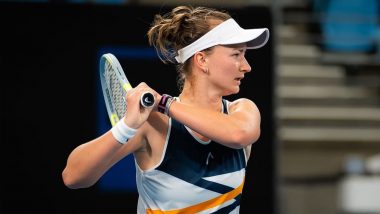 The 26-year-old Czech player will take on No.5 seed Paula Badosa for the title after the Spaniard delivered a performance of supreme quality to defeat Daria Kasatkina 6-2, 6-2 in 1 hour and 15 minutes.

After winning the match she said, "I think from both sides it was a really, really tough match," Krejcikova said, in her post-match press conference. "I think we played wonderful tennis. It was very, very tight, and I'm really happy that I was able to hold the nerves better and that I won this match.

"I was expecting it was going to be really difficult, and I know that Anett, she is playing really great tennis and she's very aggressive. I was just playing, just trying to fight for every single ball. When I had those match points down, I was just trying to figure out how to build up the point and how to win the point, and that was everything that I was focusing on."

Kontaveit had to save three break points in the very first game of the match, but once out of that jam, the Estonian cruised through the opening set. However, Krejcikova recovered to win the second set after stellar return winners gave her the critical break at 4-4.

In the third set, Krejcikova grabbed the first break to lead 2-1, but Kontaveit struck back immediately for 2-2, and the fight was on. Kontaveit earned her first three match points on Krejcikova's serve at 6-5, but the Czech powerfully brushed each of them to line up the decisive third-set tiebreak.

(The above story first appeared on LatestLY on Jan 14, 2022 09:43 PM IST. For more news and updates on politics, world, sports, entertainment and lifestyle, log on to our website latestly.com).