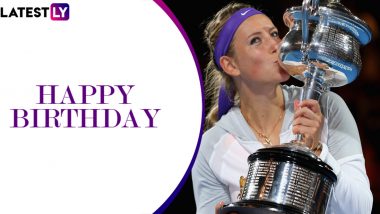 Two-time Australian Open winner and a former world no 1, Victoria Azarenka celebrates her 31st birthday on July 31, 2020 (Friday). She is the only Belarusian player to win a Grand Slam singles title. Apart from her two Australian Open trophy wins, Azarenka has also won the French Open and US Open in mixed doubles while she also played major finals in women’s doubles although with no success. She has also won 20 WTA singles titles and three WTA Premier Singles titles and was a runner-up at the 2011 WTA Tour Championships. Ashleigh Barty Pulls Out of US Open, Cites Travel Concerns Due to COVID-19 Fears.

Azarenka enjoyed a trophy-laden career in the junior levels winning Grand Slam titles in both singles and doubles. She made senior professional debut in 2006 and won her career’s first WTA singles title at the Brisbane International in 2009. She has gone on to win numerous titles in her 14-year tennis career and is widely regarded among the best women’s tennis players of her ear. Take a look at some of her memorable matches against three of her main rivals in the women’s circuit. Naomi Osaka Upset for Being Criticised on Swimsuit Pictures, Says 'It's Creeping Me Out'.

Victoria Azarenka stunned three-time majors winner Maria Sharapova to clinch her maiden Grand Slam title at the 2012 Australian Open. Azarenka won 6-3, 6-0 giving Sharapova little time to bounce back into the contest. The match lasted for an hour and 22 minutes ending the Belarusian’s wait for a Grand Slam trophy after a semi-final and four quarter-finals heartbreaks. Azarenka also reached the World No 1 with the win.

It was a pure tennis classic. Serena was the reigning World No 1 and had just lifted her 19th Grand Slam title at the 2015 Australian Open. Serena was on a 25-match win streak and had won the first two rounds without dropping a set. Azarenka had overcome Venus in the opening round. In an intense three-setter, Serena finally won 7-6 (7/5), 3-6, 7-6 (7/1) after a battle of two hours and 44 minutes.

Azarenka survived three-match points but couldn’t beat Serena to win her maiden US Open title. Serena won the first set and was quits on her way to a fifth US Open trophy but Azarenka fought back from down and out at match points to eventually win the second set and force a decider. But the second set fight-back had taken its toll and Serena won the third and deciding set comfortably to seal the final 7-5, 6-7 (6/8), 6-1.

Victoria Azarenka clinched her maiden Cincinnati Open title after beating rival Serena Williams in the final in three sets. Azarenka fought back from a set down to beat World No 1 Williams 2-6, 6-2, 7-6 (8-6) and claim her career’s 17th trophy.

She made her Grand Slam debut in 2006 and has played four finals each in singles, doubled and mixed-doubles. Azarenka has won two Grand Slam title each in singles and mixed-doubles while she is yet to taste success in the doubles category. Azarenka has also won two Olympic medals for Belarus. She won gold in mixed doubles at the 2012 London Olympics and a bronze in singles at the same event.

(The above story first appeared on LatestLY on Jul 31, 2020 08:00 AM IST. For more news and updates on politics, world, sports, entertainment and lifestyle, log on to our website latestly.com).