This was Samir Banarjee's second appearance at a junior Grand Slam with his short at last month’s French Open being the first. The Indian-American didn’t have a great time in Paris as he was knocked out in the first round. However, the youngster wasn’t disappointed and showed great character at the All England Club, reaching the finals. 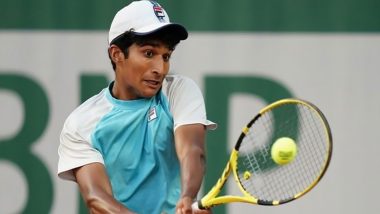 17-year-old Indian-born American tennis player Samir Banarjee captured the attention of many when he stormed into the finals of Wimbledon’s Junior Men’s event. He was tested in the opening sets by France’s Sascha Gueymard Wayenburg but showed his class emerging victorious in three sets (7-6, 4-6, 6-2) to reach the summit clash of the prestigious tournament. Indian-American Samir Banerjee Storms into Wimbledon's Junior Men's Singles Final.

This was the 17-year-old second appearance at a junior Grand Slam with his short at last month’s French Open being the first. The Indian-American didn’t have a great time in Paris as he was knocked out in the first round. However, the youngster wasn’t disappointed and showed great character at the All England Club, reaching the finals.

17 yr old Samir continued his giant killing run to storm into the finals with a 3-set win over Sascha Gueymard Wayenburg (FRA, 36) 76 46 62. Big run from the Bengali boy who has set the ITF Jr circuit on fire over the past year. pic.twitter.com/VdslCdC7S0

The first set between the two was very close as Samir managed to hold his nerve to win the set. But, Sacha made a comeback in the second set winning it 6-4, however, the Indian American wasn’t to be denied a place in the showpiece clash at one of Tennis’ grandest stages as he won the deciding set with ease.

Samir is ranked 19 in the junior ITF standings, the fourth from his country in the top 20 and will be looking to make etch his name in history as the last time a player of Indian origin won a junior Grand Slam title was when Yuki Bhambri won the 2009 Australian Open.

Who Is Samir Banerjee?

Samir and his elder sister were been in the United States, however, his parents Kunal and Usha Banerjee settled in the US three decades ago. Samir played a number of sports in his early days but eventually fell in love with Tennis. However he ‘doesn’t train at a permanent academy’, said his father.

The 17-year-old followed the same path as many Indian tennis greats before him such as Mahesh Bhupathi, Somdev Devvarman, Prajnesh Gunneswaran, going through the college route while competing at the National Collegiate Athletic Association (NCAA) – the American inter-university competition.

However, despite his dream run at Wimbledon, Samir’s parents want the youngster to focus on his academics as well. ‘We want him to do well in academics and then, if he plays really well, we will make a decision later on. It’s a difficult sport, but a degree from Columbia will always be with him, it’ll always help him. It has good value,’ his father said.

(The above story first appeared on LatestLY on Jul 11, 2021 12:14 PM IST. For more news and updates on politics, world, sports, entertainment and lifestyle, log on to our website latestly.com).