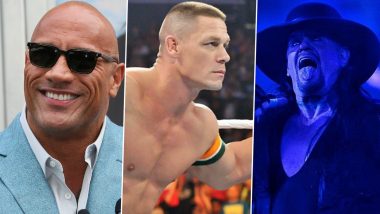 WWE has been celebrating The Undertaker's farewell since past one month as '30 Years For The Deadman'. Survivor Series 2020 was headlined with The Undertaker's farewell. The Deadman in his farewell speech said 'The time has come for The Undertaker to rest in peace'. It was indeed an emotional moment for WWE universe. Apart from this, we saw Roman Reigns defeat Drew McIntyre in a champion vs champion battle from Raw and SmackDown. Team Raw defeated Team SmackDown in both men's and women's division. Sasha Banks won against Asuka. Now let us see wrestlers pay tribute to The Undertaker. Relive The Deadman's Best Matches and Grand Entrances in WWE (Watch Videos)

Dwayne Johnson 'The Rock' Shares Throwback Picture With The Undertaker

30yrs ago today, he made his iconic #SurvivorSeries debut.

Like EVERYONE - I was in awe as a rookie in the @WWE when his first words pierced my soul as he walked in the dressing room and said, “Muthafucka” True story 😂

Honored to share the ring w you, my brother. #ThankYouTaker pic.twitter.com/ULlppOQlCa

After three decades of @undertaker committing wholeheartedly to the @WWE, tonight we bear witness to the end of an extraordinary body of work. For all the in ring moments and as a member of the @WWEUniverse, I say #ThankYouTaker! #SurvivorSeries #Undertaker30

Shawn Michaels Says Standing With The Undertaker Was Daunting Experience

We’ve faced each other in every type of match and created some of the most special moments in my career. Standing across the ring from @undertaker was always a daunting experience but I’m excited to hear the gong toll one last time. #FarewellTaker #SurvivorSeries

The measuring stick. The locker room leader. The Phenom. Three decades ago today, @Undertaker changed the landscape of sports-entertainment. His legacy is incomparable, his impact immeasurable. #ThankYouTaker. #Undertaker30 pic.twitter.com/TWm1Ihww8U

It will be hard for hardcore WWE fans to digest the fact that The Undertaker will be seen no more in the ring. WWE Survivor Series 2020 indeed ended on an emotional note as WWE might never see another star who will fill the space of The Deadman.

(The above story first appeared on LatestLY on Nov 23, 2020 01:14 PM IST. For more news and updates on politics, world, sports, entertainment and lifestyle, log on to our website latestly.com).