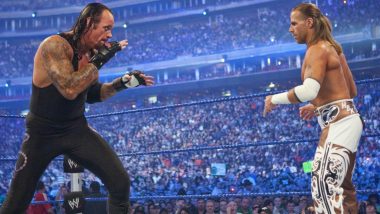 The Undertaker announced his retirement from WWE after 30 glorious years with the company. The news was broken to the fans during the final chapter of the legendary wrestler's docuseries ‘Undertaker: The Last Ride’. The 55-year-old revealed that he is at peace with not wrestling again, so as the legend hangs up his boots, we take a look at some of his best matches and his mindblowing entrances in WWE. The Undertaker Announces Retirement From WWE, Says ‘There’s Nothing Left for Me to Conquer or Accomplish’.

Mark William Calaway or known by his in-ring name The Undertaker, joined WWE (then WWF) in 1990 and made his on-screen debut in that year’s Survivor Series. His last match was the ‘Boneyard Match’ against AJ Styles at WrestleMania 36. The bout was a cinematic classic and was a perfect goodbye to a Hall of Fame career. The Undertaker Regrets His Decision of Choosing Brock Lesnar Over Roman Reigns After Former Broke His WrestleMania Winning Streak.

‘I’m at a point that this time the cowboy really rides away. There’s nothing left for me to conquer or accomplish. The game has changed. It’s time for new guys to come’ said the 55-year-old. So as the Undertaker rides away into the darkness, we take a look at some of his finest matches and captivating entrances, which made us fall in love with ‘The Deadman’.

The Undertaker vs Mankind, Hell in a Cell, 1998

Definitely the match every wrestling fans come to when Hell in a Cell is mentioned. The sight of Mick Foley being throw from the top of the cell still remains fresh in the memory. The match was supposed to end after that fall, but Foley got back on top of the cell and was slammed through it into the ring and later on thumbtacks. This was one of the most brutal matches in the history of WWE, which Undertaker ended by delivering a tombstone piledriver.

The Undertaker vs Shawn Michaels, WrestleMania 26, 2010

With Undertaker emerging victorious in previous year’s WrestleMania encounter between the two, Michaels put his career on the line and vowed to end the streak. The match went back and forth with both superstars applying their finishing moves but to no effect. However, in the end, ‘The Deadman’ finished the match with a third piledriver on the night and ended the career of one of the greatest wrestlers of all time.

This match is known as the ‘end of an Era’ match as finally put an end to one of the greatest storyline’s in WWE history. With Shawn Michaels as the guest referee, the unbeaten streak seemed in danger as Triple H and Undertaker fought inside a Cell. The Undertaker took a lot of punishment, from steel chairs, sledgehammers to Sweet Chin Music, but emerged victorious in the end.

The Undertaker's entrance at WrestleMania 19 might be one of the coolest things you'll ever see. As Nu-Metal band, Limp Bizkit played their song and with lead vocalist Fred Durst hyping up the crowd while being in the ring, The Undertaker came out on his motorbike with exploding pyrotechnics.

The Druids Light The Way

The Undertaker has always been linked with the occult during his time in WWE and at Wrestle Mania 14, he made the connection explicit. The Druids formed a pathway for the Deadman by bearing flaming torches to the sound of 'O Fortuna'.

The Undertaker was one of the best if not the best wrestler's to ever step foot inside the ring. In a career, spanning more than three decades, 'The Deadman' has given us a lot of memories to cherish.

(The above story first appeared on LatestLY on Jun 22, 2020 12:22 PM IST. For more news and updates on politics, world, sports, entertainment and lifestyle, log on to our website latestly.com).