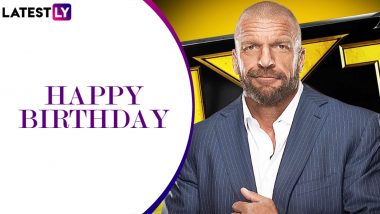 Paul Michael Levesque, popular with his stage name Triple H, celebrates his 51st birthday on July 27, 2020 (Monday). Paul is a businessman, actor and professional wrestler and currently serves as the Executive vice-president of Global Talent Strategy & Development for World Wrestling Entertainment (WWE). He is also the founder and senior producer of NXT, which is aired with WWE. Triple H was inducted into the WWE Hall of Fame in 2019 for his contribution to the world of wrestling. He is a Grand Slam Champion as well as the Triple Crown champion. As he turns 51, rake a look at some lesser-known facts about Triple H. Donald Trump Praises Triple H for Completing 25 Years in WWE, US President Labels him as a ‘Total Winner’.

Triple H began his wrestling career in 1992 with IWF (International Wrestling Federation) with the ring name Terra Ryzing. Two years later, he joined the WCW (World Championship Wrestling) and was given the gimmick of a French-Canadian aristocrat and used his original name. In 1995, he joined WWE and became Triple H, whose full ring name is Hunter Hearst Helmsley. He won his maiden WWF Championship in 1999 and hasn’t looked back since then.  Take a look at some of his interesting facts.

(The above story first appeared on LatestLY on Jul 27, 2020 08:01 AM IST. For more news and updates on politics, world, sports, entertainment and lifestyle, log on to our website latestly.com).