Fans went absolutely berserk ahead of Virat Kohli’s birthday as #HappyBirthdayVirat became on the top trends on Twitter. The Team India and Royal Challengers Bangalore (RCB) will turn 32 on Thursday (November 5), but his lovers have already started sending their wishes a day earlier. 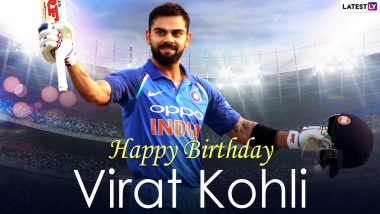 Fans went absolutely berserk ahead of Virat Kohli’s birthday as #HappyBirthdayVirat became on the top trends on Twitter. The Team India and Royal Challengers Bangalore (RCB) will turn 32 on Thursday (November 5), but his lovers have already started sending their wishes a day earlier. Born in 1988, Kohli is arguably the best batsmen to have ever taken the cricket field as his record in all forms of cricket is nothing but staggering. Be it any format or situation; the right-handed batsmen rose to all the challenges which came his way and played one match-winning knock after another. Virat Kohli Photos & HD Wallpapers for Free Download.

Kohli burst onto the scenes after guiding India to the Under-19 Cricket World Cup 2008. He made his international debut in that same year and didn’t look back since then. With Sachin Tendulkar being the latter part of his career, the then youngster took over the baton and carried forwarded his legacy brilliantly. Mental grit has been one of Kohli’s biggest strength through which he achieved many illustrious records. Along with his batting prowess, the talismanic cricketer also proved his mettle as captain, guiding India to series victories in Australia, South Africa, England and New Zealand. ICC Shares Video of Virat Kohli, Steve Smith, Ravindra Jadeja & Other Cricket Stars From ICC Under-19 Cricket World 2008.

With Virat Kohli being one of the poster boys of World Cricket, his fan-following is just unmatchable. Owing to the fact, social media got flooded with greetings even before the talisman’s birthday. Have a look.

I'm not Disrespecting Sachin,Lara,Pointing But Across The Three Formats of The Game,I Have Not

Seen Anyone One Better Than Virat Kohli

Most runs in at most 3 consecutive ODI innings

He averages nearly 63 in ICC knockouts.

I would advise any youngster should learn from Virat Kohli, how to execute perfect cover drive.pure textbook

Meanwhile, Kohli will like to make his birthday more special by lifting the Dream11 Indian Premier League (IPL) 2020. RCB have indeed performed brilliantly in the tournament, advancing to the playoffs for the first time since 2016. However, they need to register three straight victories to break the 13-year-old triumph and win the illustrious trophy.

(The above story first appeared on LatestLY on Nov 04, 2020 07:58 PM IST. For more news and updates on politics, world, sports, entertainment and lifestyle, log on to our website latestly.com).