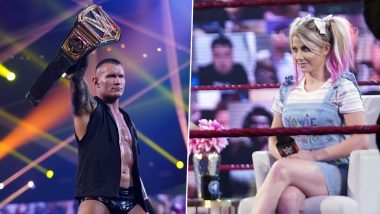 WWE Raw Oct 26, 2020 episode took place at Amway Center in Orlando, Florida. This was Monday Night Episode just a night after Hell in a Cell 2020 pay per view where Randy Orton was crowned new WWE Champion. The show was kicked off by Drew McIntyre addressing the crowd for his title loss at Hell in a Cell pay per view. He was then interrupted by The Miz who defeated Otis at Hell in a Cell to win Money in the Bank contract. At the end of the show, we saw brawl between Randy Orton and Drew McIntyre during 'A Moment of Bliss' where The Fiend Bray Wyatt just appeared and stood on the ramp without attacking anyone. WWE Hell in a Cell 2020 Results and Highlights: Randy Orton Defeats Drew McIntyre to Become 14-Time World Champion; The Miz Bags Money in the Bank Contract.

It is clear that The Fiend eyes on WWE title. We also saw the funny segment of Firefly Fun House during the show where Bray Wyatt and Alexa Bliss spoke about 'Ramblin Rabbit'. Drew McIntyre later faced The Miz in the show and defeated him taking out the anger of last night defeat. Apart from this, we saw Survivor Series qualifying matches to represent Team Raw. AJ Styles, Keith Lee, Sheamus defeated Jeff Hardy, Elias and Matt Riddle respectively in their individual matches to represent Team Raw. WWE Raw Oct 19, 2020 Results And Highlights: Randy Orton Addresses Drew McIntyre Ahead of World Title Match at Hell in a Cell; Asuka Defeats Lana to Retain Women’s Championship.

Champions will face champions. #WWERaw will put forth some already-stacked teams. It's #SurvivorSeries season!

Alexa Bliss Invites Randy Orton in 'A Moment of Bliss'

Fans are eagerly waiting for Survivor Series which is scheduled to take place on November 22, 2020. It will be interesting to see the battle of Team Raw and Team SmackDown.

(The above story first appeared on LatestLY on Oct 27, 2020 11:27 AM IST. For more news and updates on politics, world, sports, entertainment and lifestyle, log on to our website latestly.com).