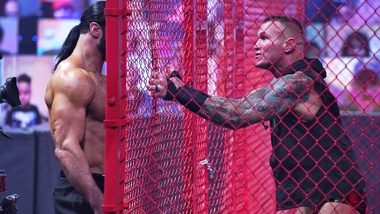 WWE Raw October 19, 2020 episode took place at Amway Center in Orlando, Florida with Thunderdome effect. This was the last episode of Monday Night Raw before WWE Hell in a Cell 2020 pay per view. We witnessed Drew McIntyre and Randy Orton face off for one last time ahead of their WWE Championship match at Hell in a Cell 2020 pay per view (PPV). We also saw Asuka defeats Lana to retain Raw Women's Championship. Meanwhile, you have arrived at the right platform, if you are looking for WWE Raw Oct 19, 2020 results and highlights. WWE Raw Oct 12, 2020 Results And Highlights: Lana Wins Battle Royal Match, to Face Asuka For Women’s Championship Title; ‘The Fiend’ Bray Wyatt & Alexa Bliss Unite.

Randy Orton said that he has more experience than Drew McIntyre when it comes to Hell in a Cell Match. Also defeating Drew McIntyre will be a legendary moment for The Viper. Speaking about Asuka match, she defeated Lana by submission. After the match, we saw Nia Jax and Shayna Baszler attack both these divas. It was then followed by a fatal 4-way tag team match which featured Shayna Baszler, Nia JaxRiott Squad, Dana Brooke, Mady Rose and Lacey Evans, Peyton Royce. Nia Jax and Shayna Baszler walked out victorious. WWE SmackDown Oct 16, 2020 Results and Highlights: Roman Reigns Defeats Braun Strowman For Universal Championship, The Big Dog Assaults Jey Uso After Match.

Another interesting segment was of The Fiend Bray Wyatt and Alexa Bliss. Both of them kicked off the show, however, they were surrounded by Retribution near ringside later. When Retribution entered to attack them, the light went off and The Fiend and Bliss disappeared. We then saw The Hurt Business enter who faced Retribution. The Hurt Business won the match where Lashley made T-bar tapped out. We also saw Elias appear on Raw where he promised that he will enjoy his concert after defeating Jeff Hardy. AJ Styles defeated Matt Riddle and Braun Strowman also won against Keith Lee.

The Fiend Teaches Retribution a Lesson

#TheFiend had some #RETRIBUTION of his own in mind on #WWERaw.

Will @dmcintyrewwe be able to conquer @randyorton inside a #HIAC? #WWERaw

Asuka Not Happy With Attack of Shayna Baszler & Nia Jax

What does @ajstylesp1 and his new colleague have in store for #WWERaw?

WWE fans can now just eagerly wait for WWE Hell in a Cell 2020 pay per view which is scheduled to take place on October 25, 2020. It will be interesting to see whether Drew McIntyre and Randy Orton rivalry finally end or continue for some more days.

(The above story first appeared on LatestLY on Oct 20, 2020 10:46 AM IST. For more news and updates on politics, world, sports, entertainment and lifestyle, log on to our website latestly.com).