The biggest event in wrestling industry is here and it is that time of the year when top stars take on each other and renew rivalries or put an end to them. Continue reading to get live streaming and telecast details of Day 1 of Wrestlemania 38 in India. 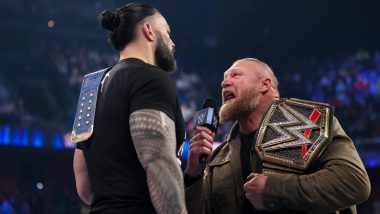 Wrestlemania, the biggest event in the wrestling entertainment industry is back with its 38th edition. WWE have lined up some very interesting matches on the card for the event and fans are undoubtedly waiting for their favourite superstars on the roster to enter the arena and put on a memorable show. The biggest match in this year's Wrestlemania is undoubtedly the one between Universal Champion Roman Reigns and WWE Champion Brock Lesnar. The match has the stipulation of 'Winner Take All' where the victor would unify both the titles and rise to the summit in WWE. The first day's match card also features a marquee clash between the legendary Stone Cold Steve Austin and Kevin Owens. WWE WrestleMania 38 Preview: Match Card, Live Streaming Details and Other Things To Know About the PPV

Smackdown Women's Champion Charlotte Flair would be defending her title against Ronda Rousey, The Usos will also defend their Smackdown Tag Team Championship against the duo of Shinsuke Nakamura & Rick Boogs. Also, McIntyre will get to have his hands on Happy Corbin. Let us take a look at the live streaming and telecast details of Wrestlemania 38, Day 1 in India.

When Is Wrestlemania 38? Know Date, Time And Venue

WWE Wrestlemania 38 Pay-per-view will be held at the AT&T Stadium in Arlington, Texas on April 3, 2022 (Sunday). The event has a scheduled start time of 05:30 PM IST (Indian Standard Time).

Where To Watch Live Telecast Of WWE Wrestlemania 38 On TV?

Sony Sports network are the official broadcasters of WWE in India and will telecast the WWE Wrestlemania 38 PPV on TV. Viewers can tune into Sony Ten Channels to catch the event live on their TV sets.

How To Watch Live Online Streaming Of WWE Wrestlemania 38?

SonyLIV, the official OTT platform of Sony Sports will be providing the live online streaming of WWE Wrestlemania 38. Fans in India can tune into SonyLIV app or website to catch the event live on online platforms.

(The above story first appeared on LatestLY on Apr 02, 2022 11:20 PM IST. For more news and updates on politics, world, sports, entertainment and lifestyle, log on to our website latestly.com).