WWE WrestleMania 38 Results and Highlights: Check Full Results from Day 1 and 2 of the 2022 Edition As Roman Reigns Defeats Brock Lesnar 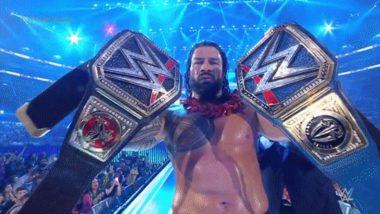 One of the major highlights of the WWE Wrestlemania 2022 or WWE Wrestlemania 38 was the return of 'Stone Cold' Steve Austin to the event after 19 years. In an impromptu No Holds Barred match, he stunned Kevin Owens.

(The above story first appeared on LatestLY on Apr 04, 2022 09:50 AM IST. For more news and updates on politics, world, sports, entertainment and lifestyle, log on to our website latestly.com).