Powered by powered by a dual-core W2 processor, Apple Watch Series 3 is claimed to provide 18 hours of battery backup. 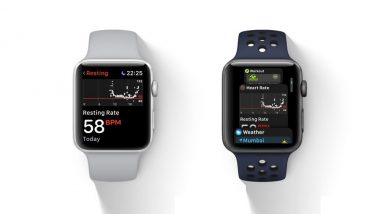 Putting end to all the rumours and speculations, the Apple Watch Series 3 with LTE support finally went on sale in the Indian market via two popular telecom operators - Reliance Jio and Airtel. Offered in 2 variants, the smaller variant of Apple Watch Series 3 LTE is priced at Rs. 39,080 while the bigger variant is offered with a price tag of Rs. 41,120. See More: Apple's iPhone X to Get Replaced Due to FaceID Issue, Users May Get a New Device

Apple’s popular Smart watch is capable of performing as a standalone device which is possible due to its in-built LTE support and the users don’t need to carry their smartphones everywhere they go. In order to get that done, it requires an e-SIM that is presently being offered by both the telecom operators. Read More: Apple Watch Series 3 Cellular Variant Coming on Reliance Jio & Airtel Networks; Pre-Order to Open on May 4

With e-SIM, the users can use the same number on both the devices - iPhone as well as Apple Watch. The notifications on the Apple Watch were pushed by iPhone via Bluetooth but with LTE connectivity coming into picture, the users can leave their smartphone at home and still able to use calling feature, apps and much more.

India’s newest telecom operator has also introduced a new service - JioEverywhereConnect particularly for Apple Watch Series 3 LTE that is available for the iPhone users without any extra cost. Moreover, interested buyers using other telecom operator like Vodafone or Idea Cellular, they can choose for Mobile Number Portability (MNP) for e-SIM connectivity. On the other hand, Airtel is also allowing its postpaid users with Airtel My Plan or Infinity Plan to opt for the smartwatch without any cost.

Apple’s popular smartwatch comes powered by a new dual-core processor and wireless chip. The device provides music stream without connecting to the smartphone. Also, the new Watch Series 3 comes with 50-meter water resistance and a barometric altimeter as far as the features are concerned. The company also claims that the smartwatch is capable of providing battery backup of at least up to 18 hours. It is also offered in 3 colours - Gold/Aluminium, Silver and Space Grey. See Also: Apple Working on Gold Colour Variant of iPhoneX: FCC Report

The interested buyers can log on to www.jio.com or www.airtel.in for purchasing the Apple Watch Series 3. Moreover, no telecom operator other than Jio and Airtel are selling Apple’s smart watch in India currently. As a result, interested buyers will be required to purchase Reliance Jio or Airtel connection.

(The above story first appeared on LatestLY on May 11, 2018 10:52 AM IST. For more news and updates on politics, world, sports, entertainment and lifestyle, log on to our website latestly.com).