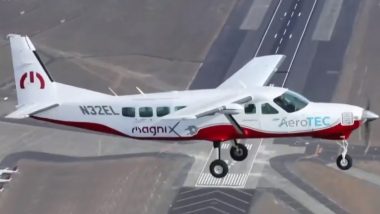 The world’s largest all-electric aircraft completed its first successful maiden flight on May 28, 2020. According to reports, the Cessna Caravan is retrofitted with an electric engine and flew for about 290 km before a safe landing at Moses Lake in Washington. The all-electric Cessna Caravan 208B is being hailed as a significant milestone in disrupting the transportation industry and accelerating the electric aviation revolution. The nine-passenger eCaravan plane is the result of a collaboration between engine company magniX and aerospace firm, AeroTEC. As the world’s first largest all-electric aircraft successfully completed its test drive, in this article, we look at some quick facts about the latest development; you may not know. NASA Unveils X-57 Maxwell, Its First All-Electric Aircraft.

The concerns over the environmental cost of flying continue to mount. Electric motor technology is expected to reach a new milestone and the launch of Cessna Caravan, is thus hailed significantly. A solo test pilot took off in the nine-seater plane and flew over Moses Kake followed by a small chase plane, for nearly 30 minutes over the Washington state. Self-flying Air Taxi Cora Launched in New Zealand by Google's Founder Larry Page's Kitty Hawk.

1. The eCaravan plane is the result of a collaboration between magniX, subsidiary business, headquartered in Redmond, Washington and aerospace firm, AeroTEC.

2. To develop the plane, the team took a Cessna Grand Caravan, one of the most-used medium-range planes in the world and they retrofitted an electric engine.

3. The original Cessna Caravan is one of the most widely used middle-mile planes in the world, with above 2,600 aircraft working in 100 countries.

4. While it was flying up in the sky, spectators at the live stream launch reported that it did not make any noise.

5. The aircraft can cruise at 183 kmph. The makers hope that it could enter the commercial service by the end of 2021 with a range of 100 miles.

As the world continues to deal with a pandemic, the aviation sector’s creation is lauded, leading to contributors to carbon emissions across the globe. The company also reported that it could be possible to operate 100-seat aircraft on an engine-powered purely by electricity—but it is likely decades away. Many countries around the world are trying to develop an all-electric powered plane. The Cranfield Aerospace Solutions (CAeS) in England announced last year on November that the company is working on electric planes and commercial flights are estimated to start as early as 2023.

(The above story first appeared on LatestLY on May 29, 2020 04:04 PM IST. For more news and updates on politics, world, sports, entertainment and lifestyle, log on to our website latestly.com).