Crypto Entrepreneurs Fail To Get Response From Elon Musk With 30-Foot GOAT Statue Worth $600,000

After spending more than $600,000 creating a 30-foot-long, 12,000-pound metal sculpture of Elon Musk headed goat riding a rocket, the cryptocurrency entrepreneurs failed to get the response from the billionaire as they had hoped. 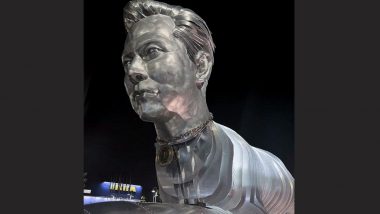 San Francisco, Nov 28: After spending more than $600,000 creating a 30-foot-long, 12,000-pound metal sculpture of Elon Musk headed goat riding a rocket, the cryptocurrency entrepreneurs failed to get the response from the billionaire as they had hoped.

According to The Wall Street Journal, the creators of "Elon GOAT" claim that the name of their cryptocurrency was inspired by their admiration for Musk, who they and other fans believe is the "greatest of all time", or a "GOAT".

They delivered it to Tesla's headquarters in the hopes that Musk would accept the gift. Elon Musk To Bring Back Vine? Twitter CEO Says Will ‘Look Into’ Way To Recover Old Videos.

The event has been dubbed "Goatsgiving" by its creators.

After spending about two hours outside the Tesla HQ the co-founders of Elon GOAT did not get any sign of Musk, according to the report.

A Tesla security officer, Dustin Dailey, walked over to a group of about 15 people and said they couldn't accept Musk's sculpture, but would put it on their property if Musk approved.

Elon GOAT co-founder and chief marketing officer Alec Wolvert said they planned to camp out on public land off a toll road overlooking the headquarters until Musk accepted the sculpture, the report added.

"We're gonna stay here as long as possible. I even heard some people say they were going to strap themselves to it," Wolvert was quoted as saying. Top Three Cryptocurrencies To Watch Out for in 2023 and Why This Is Best Time To Plan for the Bull Market.

The idea of the sculpture came together last year. "It was an evening joke that kind of just came to fruition," said Ashley Sansalone, an Elon GOAT co-founder.

"Elon tweeting us would legitimise the token," he added.

(The above story first appeared on LatestLY on Nov 28, 2022 02:02 PM IST. For more news and updates on politics, world, sports, entertainment and lifestyle, log on to our website latestly.com).