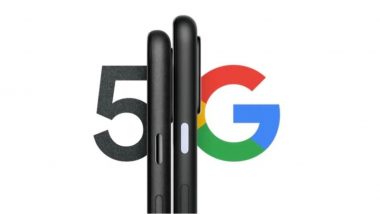 San Francisco: Google is prepared to launch Pixel 5 smartphone during its annual hardware event on September 30 and now a new report claims that the smartphone will be priced at $699 in the US. According to Jon Prosser, a reliable Apple insider and serial leakster, Pixel 5 with 128GB storage will be priced at $699 which is $200 more than Pixel 4a 5G. Google Pixel 5 With Snapdragon 765G Spotted on AI Benchmark, Likely to Be Launched Soon.

Furthermore, Vodafone Germany leak reveals Pixel 5 pricing as €630. The Google Pixel 5 recently appeared on AI Benchmark and the listing confirms that it is powered by the SD765G SoC. The presence of the SD765G inside the device reveals that it will debut as the first 5G-ready Pixel phone.

The device will be the first Pixel phone to come with 8GB RAM. However, the AI Benchmark has no information on the other specs of the device. The upcoming Pixel 5 smartphone is also expected to feature a larger 6.67-inch, 120Hz OLED panel. It is expected to arrive with more premium features, IP water rating and wireless charging support.

(The above story first appeared on LatestLY on Sep 28, 2020 09:49 AM IST. For more news and updates on politics, world, sports, entertainment and lifestyle, log on to our website latestly.com).