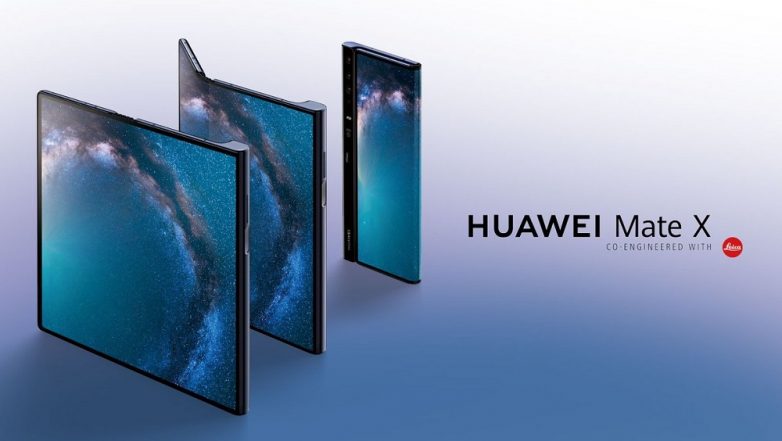 Beijing, July 20: Chinese smartphone manufacturer Huawei's foldable phone Mate X has passed through Chinas TENAA certification agency and is listed as a 5G phone with model number TAH-AN00. According to the listing, the device would house an 8-inch OLED screen with a resolution of 2,480x2,200 px. The battery will come with a minimum rating of 4,400 mAh, news portal GSMArena reported on Friday. Huawei To Take On Samsung & Apple With Its First Tablet; To Be Launched By First Week of July.

The device would come in three different RAM and storage configurations: 6GB + 128GB, 8GB + 256GB, and 12GB + 512GB, each with support for expansion via the Nano Memory card standard.

In addition, the listing also reveals that the device is running Android 9 Pie operating system out-of-the-box and is likely to have EMUI 9.1 custom interface on top.

As far as the cameras are concerned, the phone features a 40MP main sensor, an 8MP telephoto lens with a 16MP ultrawide lens and a Time of Flight (ToF) 3D camera. As for the connectivity options, the device supports NFC, dual-frequency GPS, Bluetooth 5.0, WiFi 802.11 b/g/n/ac, and USB Type-C port.